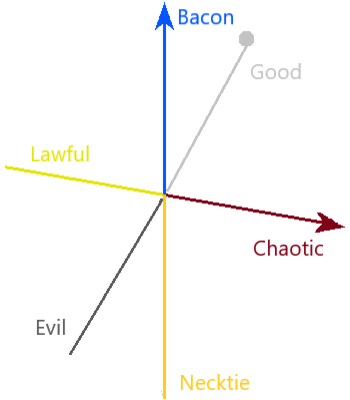 Ye who walk the Path of Bacon
shall be with dinner blessed.
Yet ye who walk the Way of Necktie
shall be for dinner dressed.
"For one of dragon's blood to not take up weapons, to not prepare night and day to slaughter any enemies that would come against them—it is unthinkable. It is—one who does such a thing, who believes the world will not be dangerous, will not strive to kill him… That is what we call insane."
— Shidan, Embers (Vathara)
Advertisement:

The strangest of these characters are those who espouse Blue and Orange Morality. These characters have a moral framework that is so utterly alien and foreign to human experience that we can't peg them as "good" or "evil". They aren't a Chaotic Neutral Unfettered, though they may seem to act terrifyingly randomly; nor are they necessarily a Lawful Neutral Fettered, because our and their understanding of "law" as a concept may not even be equivalent. There might be a logic behind their actions, it's just that they operate with entirely different sets of values and premises from which to draw their conclusions. It's also worth noting that such cultures are just as likely to be something we'd find appalling as they are to be something we'd find benign and/or weird. They may also find us appalling, benign, or weird even if we don't see them that way.

Note that cases involving solely a misapprehension of facts and consequences do not count here, no matter how alien the reasons; if, for example, a race of aliens thinks killing is okay because its own members respawn within a day with no harm done, and mistake humans as working the same way, that doesn't mean they wouldn't balk at killing if they realized the degree of harm it causes to other creatures. In this case, they may be working by comprehensible moral standards and just gravely mistaken about the implications of their actions. This is not to say that trope can't still apply if the culture remains this way with no grasp of the reasons behind it. If, say, such a race of aliens really do exist, and really did come to believe killing is okay as a side effect of the reasons above, but don't apply this to their thought processes when killing, and thus, think just as little of killing mortals who don't respawn, then this trope can still apply.

See also these tropes, which includes/connected to this kind of Morality System: Xenofiction, Humans Are Cthulhu, Humanity Is Infectious (all often involving this), Insane Troll Logic (when the set of values is still rooted in our world but just doesn't make sense to us), Above Good and Evil, Affably Evil/Faux Affably Evil (they sometimes can come across as this), Even Evil Has Standards (when handled poorly or bizarrely), Evil Cannot Comprehend Good (less elaborate forms that resemble this in practice), Non-Malicious Monster (which occasionally requires this), and Obliviously Evil (when a villain thinks that his actions are acceptable or helpful). When two sides go to war and nothing will stop them except total annihilation, that's Guilt-Free Extermination War. If the character genuinely knows everything will turn out okay, allowing the plot to treat them as a good guy no matter how cruel, irresponsible, or inhuman this makes them by our standards, that's Omniscient Morality License.

Not to be confused with Orange/Blue Contrast (though the fact that there's a contrast between those colors does help this trope's name make more sense).

Lelouch and Suzaku manage to find Nunally stuck with a motion-sensor bomb above her head.

Lelouch and Suzaku manage to find Nunally stuck with a motion-sensor bomb above her head.