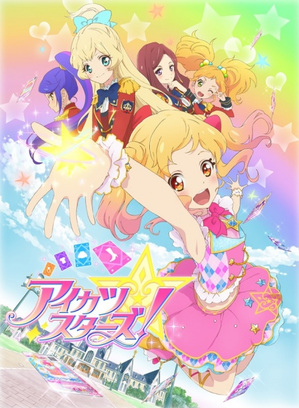 Aikatsu Stars! is a Spinoff of the Aikatsu! series by Bandai Namco Pictures. It tells the story of a middle school student named Yume Nijino who joins Four Stars Academy with her friend Koharu Nanakura to become an idol and become a part of S4, a group of the top four idols who attend the academy. Along the way, she becomes friends with Rola Sakuraba, a girl who also aims to become an S4 member.

The second season covers Yume and friends against a new threat— ruthless and competitive idol Elza Forte, leader and founder of the idol school and talent pool Venus Ark. With her quest to maintain her "perfect" image and her need to obtain the elusive Sun Dress, our heroines need to put their all into their idol activities to have a shot at cutting Elza down to size.

The series aired its last episode on March 29th, 2018 and was replaced by Aikatsu Friends! in April 2018.