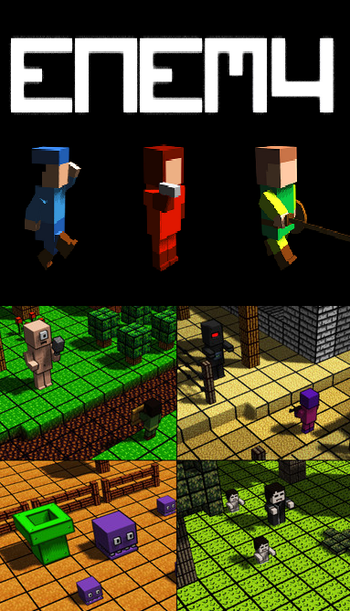 This land has seen better days.
A brutal cyclops rules the forest.
A slime devours the plains.
A rogue AI administrates the tropics.
A vampire drains life from the swamp.
Gather friends and equipment. Defeat the four kings.
—Opening Cinematic

Enemy is a tactical Roguelike Turn-Based Tactics game by Tom Johnson. It was funded

The game takes place in a procedurally generated world that uses decades-old video games as its building blocks. The result is a collision of genres, where haunted swamps, tropical war zones, and peaceful mushroom villages all stand side-by-side. You are a hero who has decided to fight the evil that plagues their land, building up your own custom squad of retro game characters with their own mix of skills. These abilities range from mental health and reaction time, to the use of blasters and the ability to jump five times your own height.

Enemy is built on a turn-based combat system closely inspired by X Com UFO Defense and Jagged Alliance. You'll devise strategies based around the unique set of abilities you've chosen for your team, and then execute them step-by-step, all while responding to counter-moves made by the enemy. It models the stress of battle on your heroes, who can flee or go berserk if things start to go too wrong. Additionally, everything in the game is destructible. If you damage the supports of a building in the middle of a fight, the whole structure can come crashing down on you. Inadvertently starting a small fire in the wrong place can lead to being caught in the middle of a massive inferno. Combat is dynamic, and easily spirals out of control.

The Steam page, which includes a downloadable demo, can be found here.

Come here, I just wanna give you a hug.