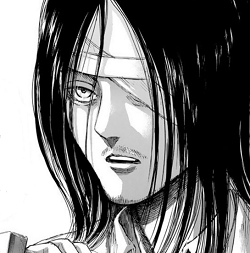 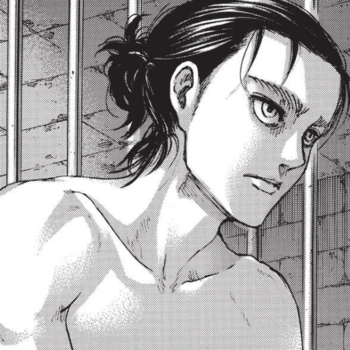 "I want to see and understand the world outside. I don't want to die inside these Walls without knowing what's out there!"

The main protagonist of the series. An aggressive young man with two defining passions: his desire to explore the world beyond the Walls, and his hatred towards the Titans. His grudge against the Titans is catalyzed further into a murderous rage when they invade his home town and he is helpless to save his mother from being devoured. When he graduates the 104th Training Corps, he is ranked 5th overall and he intends to join the Survey Corps.

During his military training he is judged to be of average skill and talent for Titan killing and 3DM maneuvering, but through sheer hard work he is able to graduate 5th out of his class with notable checkmarks on hand-to-hand combat. After a near-death experience during the Battle of Trost, he discovers that he possesses the ability to create and control a Titan body, transforming himself into a Titan. This revelation makes him a target for several opposing factions, who either view him as a threat or the key to humanity's survival.

Eren is forcefully enlisted into the Survey Corps to be kept in check by Captain Levi Ackerman, to be used for explorations outside the Walls by Commander Erwin, and to collaborate in Titan-related experiments performed by Hange Zoe. Most of his fellow 104th top-10 teammates follow suit and join him in the Corps. However, his inexperience with the power means that he struggles to transform into anything that is not a berserker fueled by blind hatred at first. Even after he learns to gain some measure of control, the experience gap places him at a distinct disadvantage against his main adversaries.

After Eren is captured by enemy forces, he awakens his most powerful ability and the main reason the Titan Shifters were after him: the power to control other Titans. In the next arc, he becomes a target for kidnapping again, this time alongside Historia and by a dangerous enemy faction hiding within the Walls.

Four years after reclaiming Wall Maria, Eren has used the war between Marley and the Mid-East Alliance to infiltrate the mainland. Disguising himself as a wounded soldier, he travels to Liberio and befriends the Warrior cadet Falco Grice.