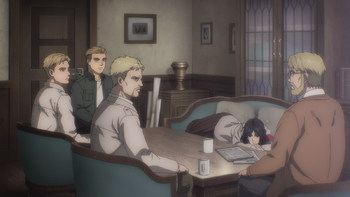 Titan Shifters of the Warior Unit in the year 854.

The Warrior Unit is a military project by the Marleyan government which consists on recruiting Eldians among the ghetto populations in order to train them and indoctrinate them into becoming hardened "warriors" for Marley; the cream of the crop are then given one of the seven Titan powers under control by the Marleyan goverment. The program's main mission is to infiltrate the Eldian society behind the Walls and obtain the Coordinate Titan power from the Eldian royal family without awakening the millions of colossal Titans entombed inside the Walls. In return, the Marleyan Government promised to award full Marleyan citizenship to the participants who'd successfully carry out their mission, while granting special privileges to them and their families in the mean time. The initiative, which began fifteen to twenty years before the Fall of Shinganshina, was intended to give the seven Titan Powers of Ymir Fritz under the control of Marley to select individuals in order to carry out the infiltration, though only six individuals were shown to have been Titanized (with one going unused for undisclosed reasons).

The first "Warrior" mission to Paradis, lasting a period of over five years, involved the deployment of six of the Titan Shifters, of which four were supposed to infiltrate the Eldian society and enlist in their military forces and the other two oversaw operations and logistics from outside of the Walls; the mission was considered a disastrous failure because of the demise of two of the infiltrators, the capture of one by the Eldian Military, and the miraculous rescue of the remaining one by the skin of their teeth. All in all, it resulted in the loss of two of the Titan Powers, Female and Colossal, with only the salvaging of the Jaws Titan Power and having caused massive casualties within the Three Walls as the redeeming points of the operation. This failure caused the Kingdom of Marley to be politically and militarily undermined by their neighboring countries, elevating hostilities and causing a four year war against the Mid-East Alliance forces. The rise in hostilities and the newfound vulnerability of the Titan Shifters due to technological warfare advancement have reopened the discussion of undergoing a second "Warrior" mission to Paradis, this time with the full backing of the Marleyan Navy, with candidates for the Titan Powers being evaluated.

Most, if not all, of the Titan Shifters in the Warrior Unit come from the Liberio Internment Zone, which is further explored on this page.

open/close all folders
General Tropes
Tropes that apply to the Warrior Unit as a whole.

Characters who are known members of the Warrior Unit:

Note: These entries pertain exclusively to the Eldian individuals loyal to Marley that either hold Titan Powers or are candidates to inherit them as per the Warrior Unit; for entries pertaining the Titan Powers, see the section of the "Warriors" in the Titans character page.

Warriors of the First Mission to Paradis Island

The Warchief of the Warriors, the true identity behind the Beast Titan, and the main antagonist of the pre-Time Skip half of the series.. Zeke is the first-born son of Grisha Yeager with his original wife Dina Fritz, and therefore, the older half brother of Eren Yeager. He initially appeared within Wall Rose after the capture of Annie at Stohess, and transformed the people of Ragako Village into Titans in order to test the military's response to the threat. He takes command over Reiner and Bertolt soon afterwards, promising to end their long battle. Zeke is a mysterious and manipulative person whose actions are showed in mystery even to his fellow Warriors and superior officers in Marley.

Considered a paragon of the Eldian minority's loyalty towards Marley from an early age, Zeke is a prodigious wielder of the Titan's power due to his ability to control other Titans, and is by far the greatest and mightiest of the "Warriors", earning himself a voice in the inner circle of the Marleyan military's high command as the de-facto internal leader of the Warrior Unit and the flag-carrier for its cause.

"It's been two months since I've been a human. I kinda forgot the whole bipedal thing."

A Titan Shifter who's the current holder of the Cart Titan, she participated in her Titan form in the battles at Shighanshina and Fort Slava. Pieck is an easy-going but remarkably intelligent young woman who is eccentric and playful in an equal degree. 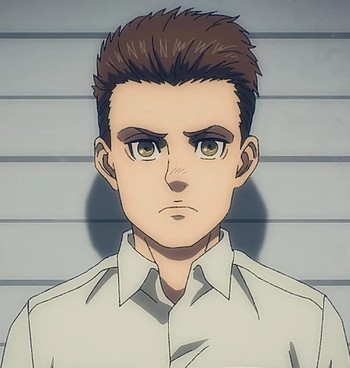 A childhood friend of Reiner and Bertolt, who sacrificed his life to save Reiner from a Titan, later revealed to have been a Titan Shifter and with the same mission as them. It's further implied that he used to be the holder of the Dancing/Jaws Titan power before he was devoured.

Warriors and Candidates during the Mid-East Alliance War

Porco Galliard, or Galliard for short, is Titan Shifter serving under the Marleyan Army, having inherited the Jaws Titan after devouring Ymir from the 104th. He is Marcel's brother and was Reiner's childhood rival, a relationship that has only gotten worse with time. He was originally the lead candidate to inherit the Armored Titan during the preparations for the first Warrior mission to Paradis, though Reiner was given priority over him.

Porco was first on the list to receive a Titan after the return of the Warriors from Paradis, and he's the latest Warrior of the original program to receive a Titan Power. Though he is known in the military due to his contrarianism, Porco is considered an exemplary soldier and Warrior.

A young Eldian recruit serving on the Marleyan army under Captain Magath, also a candidate to inherit the Armored Titan power. Somewhat of a laggard, Falco is not particularly looking forward to inheriting the Titan Power, but Reiner's pleas convince him to push onward for the sake of Gabi. Falco is the nephew of the Eldian Restorationist Grice, who was Grisha Yeager's right-hand man, and whose capture led Falco and Colt to enlist in order to atone for his crimes.

From Chapter 91 onward, Falco becomes a Deuteragonist in the manga alongside Gabi and Reiner.

"I'm gonna win this battle and prove that the Eldians left in this world are good Eldians!"

"It's true... I am exceptional compared to Falco and the others. There may never be another Warrior as talented as I am. Not to mention one this cute."

An Eldian girl serving under Captain Magath. She is Reiner Braun's cousin, and one of the candidates being considered to inherit the Armored Titan from him. Enthusiastic, zealous and fierce, Gabi is the top Warrior candidate of the new batch of cadets.

Gabi is one of the main characters of the Marley arc (Ch. 91+) alongside Falco and Reiner.

An Eldian serving in Marley's Warrior unit, and the elder brother of Falco. He has been selected to inherit the Beast Titan from Zeke, and shadows his superior. He alongside Falco are the nephews of the Eldia Restorationist Grice, and enlisted together in the Warrior Unit to atone for his crimes. 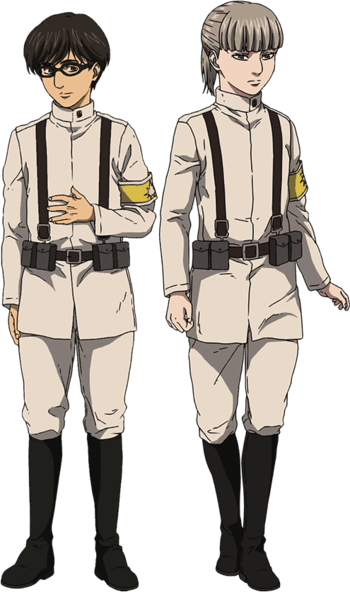 A pair of young Eldian recruits and Warrior Candidates, serving alongside Falco and Gabi in their unit. 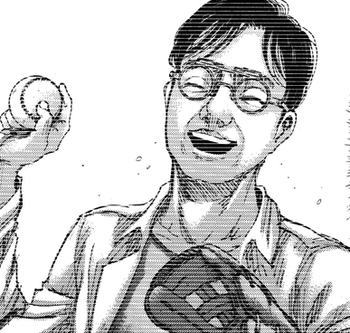 The previous holder of the Beast Titan. He was close to Zeke as a child, frequently playing catch with him as training. As the holder of a Titan Power whose form was morphologically unsuitable for combat, he was marginalized as a placeholder until a suitable candidate was found in Zeke.