The largest branch of the military, responsible for guarding the Walls and handling its routine maintenance. Prior to the loss of Wall Maria, they were considered little more than glorified repairmen. From then, they are considered the first line of defense of the Walls, providing artillery and manpower. They are mostly trained in urban combat to defend districts against Titan barrages, though they are considerably less experienced than the Survey Corps, while also engaging in sporadic police work. They suffer heavy losses in the Battle of Trost, forcing them to provide backup for the other branches of the military henceforth.

The Garrison also features Elite Forces, mainly specialized in tactical deployment and special ops, as well as the Quartermaster Corps, which handle the military headquarters of each district, storing and providing weapons, ammunition, gas and blades for the infantry divisions of all the military branches.

The Garrison and its troops are partly responsible for successfully defending the district of Trost, thus effectively preventing the fall of Wall Rose to the Titans and earning with the help of Eren Yeager, mankind's first victory ever against the Titans. The Garrison's engineers were responsible for killing the greater bulk of the Titans that stormed Trost once the gap on Wall Rose was plugged by Eren Yeager, while the few stray ones were dealt with by the Survey Corps.

Albeit it's not by any means uncommon, none of the top ten cadets from the Southern Branch of the 104th Trainee Corps join the Garrison, making it overall the least featured branch of the military in the story.

As stated in Chapter 105 of the manga, the Garrison was eventually dissolved and incorporated into the Survey Corps, effectively ending its existence as a branch of the military.

The reserve force for the Walls, they sit between the suicidal Scouts and the corrupt Military Police.

Tropes that apply to the Garrison as a whole:

"If it means mankind will live on, I don't mind being called a murderer."

The commanding officer responsible for the entire Southern territory within Wall Rose, noted for his eccentric personality. He is the first to recognize the great potential in Eren, and organizes the mission to reclaim Trost in response. He holds the rank of General and holds the full authority in terms of defense operations in the military overall. 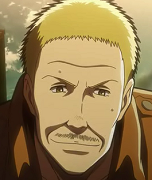 A long-time friend of the Yeager family, and Captain in the Garrison. He spent his days drinking and slacking off, while occasionally doing his best to keep Eren out of trouble. He feels a strong sense of debt to them, after Grisha saved his wife from an epidemic. His inability to save Carla from the Titans greatly haunts him, and he feels a strong paternal fondness towards Eren, Mikasa, and Armin.

The leader of the operation to plug the breach in Wall Rose. He sacrifices himself along with most other Garrison Elite troops to ensure the operation's success. 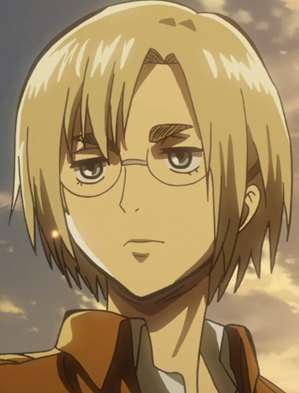 A Squad Leader in the 1st Division Elite Force, assigned to work alongside Eren during the mission to plug the breach in Wall Rose. She's quick to signal the mission as a failure, and has strong doubts over him being an asset to humanity. She is one of the Garrison members guarding the Eastern Line of Defense after Titans are sighted within Wall Rose. 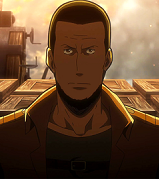 A Squad leader assigned to work with Eren during the mission to plug the breach in Wall Rose. He sacrifices himself along with most other Garrison Elite troops to ensure the operation's success.

A female soldier assigned to Dot Pixis, often seen escorting him. She expresses frustration with her commander's worst habits. 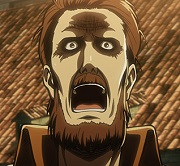 One of the senior officers in charge of the defense of Trost and the acting commander of the Trost Quartermaster Corps. He abandons the trainees under his command, and later attempts to execute Eren, Armin, and Mikasa. He is one of the Garrison members guarding the Eastern Line of Defense after Titans are sighted within Wall Rose.

Lobov
A Commander of the Garrison, he is first seen during the Battle of Trost where he threatens to execute deserters fleeing the battlefield. After the Time Skip, he joins the modernized Survey Corps. For his page, see the Survey Corps page.