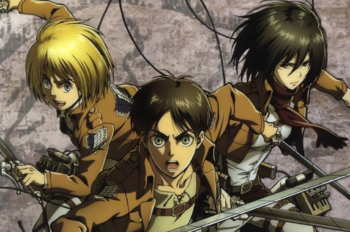 The primary characters of the series, Eren Yeager, his adoptive sister Mikasa Ackerman and their friend Armin Arlert are childhood friends from the Shiganshina district who were orphaned during the attack in the year 845 and subsequently, the government-mandated purge in 846.

The three are among the few survivors of the Fall of Shiganshina, the outermost, southernmost settlement of humans of Wall Maria, in great part due to their family friend Hannes and Armin's grandfather, the very person who instilled them with their curiosity about the outside world. Forced to toil in the fields to survive, and following the death of Armin's grandfather in the aforementioned purge, they set to join the 104th Trainee Corps to save humanity and see the world beyond the walls. The three of them prove to be key elements of the retake of Trost District after Eren is revealed to be able to transform into a conscious Titan.

Opting to join the Survey Corps, the trio has to cope with the possibility that there are other people who are able to transform into Titans and could have infiltrated either the Three Walls, or the military forces, or both. As such, Eren becomes a target for said people, and it's up to the Survey Corps to both use him as bait to capture the infiltrator(s), and to make him more familiar with his own powers in order to fend them off, so that in the future they can use him as an asset to be able to retake Wall Maria. As it is, it's up to Armin to guide Eren and counsel him, all while providing crucial strategy assistance to the Corps, while Mikasa takes the role of protecting them.

After Eren is captured by enemy forces, he awakens his most powerful ability and the main reason the Titan Shifters were after him: the power to control other Titans. In the next arc, he becomes a target for kidnapping again, this time alongside Historia and by a dangerous enemy faction hiding within the Walls.

Four years after reclaiming Wall Maria, Eren has used the war between Marley and the Mid-East Alliance to infiltrate the mainland. Disguising himself as a wounded soldier, he travels to Liberio and befriends the Warrior cadet Falco Grice.

"This world is a very cruel place. But it is also very beautiful."

Mikasa is the adoptive sister of Eren and mutual childhood friend of Armin. A former resident of the rural outskirts of Shinganshina in the interior of Wall Maria, Mikasa is adopted by Dr. Grisha Yeager after her mother and father are murdered by human traffickers. Mikasa hides her emotions but cares deeply for Eren — never hesitating to cry with tears of joy or despair depending on what happens to him. She shares an unbreakable bond with Eren following events in their past, and his mother requesting that she protect him made her even more overly protective of him than she was beforehand. She is very physically strong and physically skilled. Her dream in life is to live a peaceful life in the walls with Eren. She enrolls in military training, ranking 1st on her class, and later joins the Survey Corps because Eren does. Noticeable even during her training days, Mikasa comes to be known as an exceedingly capable and swift soldier, and a force to be reckoned with on her own.

Discovering several traitors hiding in their midst, Mikasa reaffirms her mission to protect Eren. With Humanity's Strongest sidelined by an injury, she is forced to step up and take to the front lines to protect Eren. While facing the traitors, she realizes her own attachment to comrades may impede her mission and is deeply shaken by her failure. This leads to her becoming more ruthless, even willing to cut down her own comrades if they should prove an obstacle. She is promoted into the second incarnation of the Special Operations Squad, and appears to have become Levi's new second in command.

Four years later, Mikasa makes her return fighting on the frontlines against the forces of Marley alongside Eren and the Survey Corps.

"People who can't throw something important away can never hope to change anything."

Armin is the childhood friend of Eren and Mikasa. Raised by his grandfather alone at Shinganshina after his parents are killed, Armin is a submissive child who does not have physical strength or physical skill, however he is very intelligent and is a great tactician. Originally Armin lacks confidence in himself and his abilities. However over time he gradually gains confidence. He enrols in military training, ranking below the Top 10 but having otherwise excellent academic marks, and later joins the Survey Corps with Eren and Mikasa. He does this, firstly to try to make a good and meaningful impact on the world, and secondly due to his dream to see the outside world. Both his curiosity and pragmatism have remained strong personality traits from when he was young, and his life has been driven by this aspects. He is very adamant to learn about the natural world outside the walls and unknown legends.

His keen mind proves vital in uncovering the identities of several traitors hiding among his comrades, providing key evidence to their guilt. He takes part in the mission to rescue Eren from the traitors, revealing a far more ruthless side in order to turn the tide of the battle. Afterwards, he is promoted into the second incarnation of the Special Operations Squad charged with protecting Eren and Historia.

Armin played a key role in the retaking of Shingashina; most prominent was his plan that allowed the corps to finally subdue Bertolt, the Colossal Titan. Unfortunately, the plan involved using himself as bait, and he was nearly burned to death by a super-heated steam blast. However, his life was saved when Captain Levi decided to use the dose of Titan serum he obtained from Kenny to turn Armin into a Mindless Titan. They then fed him the incapacitated Bertolt, and after a few quick crunches the Titan body collapsed and an unconscious, but very much alive, Armin emerged as a Titan Shifter.

As the current host of the Colossal Titan, he has used its power to protect the coast of Paradis Island. When the Survey Corps launches their operation to retrieve Eren from Marley, he is given the task of destroying Marley's naval forces.