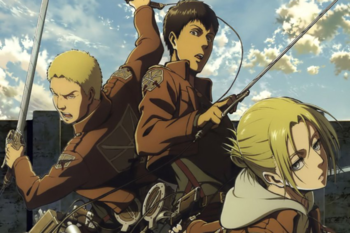 Reiner: We were just kids... we didn't know anything. note From left to right: Reiner, Bertolt and Annie.

"You guys... You really are the worst pieces of shit. I bet in the history of mankind, nobody's done anything as terrible as you. I've gotta erase you. You shouldn't be allowed to exist anymore."
— Eren Yeager, in regards to Reiner and Bertolt

The primary antagonists for the first half of the series, Reiner Braun, Bertolt Hoover, and Annie Leonhart are outside agents sent to attack the Three Walls and exterminate those living within. Beginning in the year 845, they appeared at the town of Shinganshina and breached Wall Maria, allowing the Titans to enter human territory for the first time in a century. Afterwards, the group infiltrated human society in the chaos by passing themselves off as refugees from a remote village in the southern mountains of Wall Maria.

Two years after the Fall of Wall Maria, they enlisted in the military as members of the 104th Trainee Corps. While Annie acted separately from her partners, Reiner and Bertolt continued to openly associate with their fellow cadets and work closely together. All three established themselves among the top cadets, excelling in their training and eventually graduating just behind Mikasa Ackerman as the 2nd, 3rd, and 4th place graduates. They also established close bonds with several other cadets, befriending Eren and Armin in spite of their roles in destroying Shinganshina.

Shortly after their graduation, they resumed their mission by attacking the district of Trost and breaking down the external gate. Like their fellow graduates, they were assigned to assist the Vanguard in defending the district. Their initial plan was derailed with the discovery of Eren's powers, leading them to abandon any further efforts to attack the district. Changing their focus to capturing Eren, they continued their infiltration with Annie enlisting in the Military Police Brigade to gather intel from the interior, while Reiner and Bertolt joined the Survey Corps to monitor Eren. They would carry out several failed attempts to kidnap Eren, ultimately leading to the failure and abandonment of their mission.

"Anyway, I'm not stupid enough to enjoy playing soldier in this shitty world."

Ranked 4th. She is cold and aloof, but has a deep admiration for people with strong ideals. Noted for her exceptional and unique fighting style, which she taught to Eren. While her classmates choose to join the Survey Corps, she follows through with her stated plan of joining the Military Police Brigade; she is the only Top 10 candidate to do so. During the 57th Expedition, she appears as the Female Titan and slaughters many soldiers while pursuing Eren. Failing to capture him, she is identified by Armin and led into a trap by him. Defeated by Eren and Mikasa, she uses a mysterious power to encase herself in crystal and remains in the Survey Corps' custody.

As told through Reiner's memories, Annie was an Eldian girl from the Libero Internment Zone who was raised by her father to become a Warrior. Due to her excellent hand-to-hand combat skills, she earned the right to inherit the Female Titan, and was chosen to take part in the Paradis Operation. When the mission was threatened by Marcel's death, she fought to abandon the operation and was forced into continuing by Reiner. Over the years, she traveled between the Walls to gather information.

She is the main character of the spinoff manga, Attack on Titan: Lost Girls, which details her adventures while in the Military Police Brigade.

Ranked 3rd. He is noted to have exceptional skill, but has horrible self-esteem and defers to others on almost all things. His comrades consider him quiet and awkward, in complete contrast with his childhood friend, Reiner. A refugee from a remote mountain village, he lost his home to a Titan attack and longs to return there someday. He expresses admiration for Eren's conviction, stating that he intends to join the Military Police Brigade in order to be safe from the Titans. However, he is one of those that follows Eren into the Survey Corps.

Unable to stop Reiner's stress-induced breakdown, Bertolt is exposed as a spy sent to attack Paradis as the Colossal Titan. In the ensuing chaos, he is nearly slain by Mikasa but is successful in kidnapping both Eren and Ymir. Though initially cold and unresponsive to his former friends, when pushed by Jean and Connie, he admits to his remorse over his actions and claims that he has no other choice. When Reiner is defeated by the military, he is forced to abandon his mission and retreat back to Titan territory along with his partner and Ymir.

As told from Reiner's flashbacks, Bertolt was an Eldian child from the Libero Internment Zone, he volunteered for the Warrior Unit and was accepted as a top candidate. Though a kind-hearted boy, he excelled in his training and was selected to inherit the power of the "God of Destruction" — the Colossal Titan. He was sent to Paradis Island in order to steal the Founding Titan, infiltrating the Walls after destroying Wall Maria.

Once an outgoing and cheerful boy, the guilt of his crimes made him withdraw further into himself. After being exposed, he gave in to despair and carried out a brutal assault against the Survey Corps. His defeat and subsequent death at Wall Maria was a crucial blow against Marley, sparking a 4-year War with the Mid-Eastern Union. Reiner, the sole survivor of the operation, remains haunted by his inability to save his friend.