The elite force that answers to the King, responsible for maintaining the peace. Their organization is infamously corrupt, and many recruits hope to join in order to take advantage of the safety and comforts it affords. Only the Top 10 graduates from every year are allowed to apply, meaning that the most talented are the soldiers least likely to ever have to face Titans. They are actually divided into two separate organizations — the regular branch, and the secretive Central 1st Brigade that operates directly out of the Capitol. Though most of the top ten cadets of the 104th Trainee Corps intended to join the MPs (as they had earned the right to do so), only Annie Leonheart ultimately joins, while the rest opted for the Survey Corpsnote It's mentioned that Connie Springer, Reiner Braun, Bertolt Hoover, Marco Bott, and Jean Kirstein intended to join, while Ymir gave up her 10th spot for Krista Lenz to join, and Mikasa Ackerman refused to join for the sake of Eren Yeager; all of them (including non-top tens Ymir and Armin) joined the Survey Corps except Marco Bott, who perished during the Battle of Trost District. Sasha Braus' branch assignment intentions were not stated in the story, but she ultimately joined the Survey Corps too.

The regular branch of the Military Police mainly oversee operations within the confines of Wall Sina, mainly engaging in escort missions and enforcing official summons to the interior within the Three Walls for matters related either to the Crown or the Military court. As such, and unlike the Survey Corps and the Garrison, they are unfamiliar with combat in almost all aspects. Lacking in leadership and purpose, and apart from the aforementioned corruption, the MPs are notoriously lazy and unconcerned with protocol, rarely if ever receiving punishment for their faults.

Contrary to the other branches, the Military Police saw no discernible improvements in response to the Fall of Wall Maria in personnel training, equipment or structure other than the creation of the Central 1st Brigade, thus keeping the regular branch stagnant, corrupt and isolated.

General Tropes
Tropes that apply to the Military Police Brigade as a whole.
Nile Dok 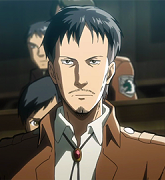 "It's not my place to think about that. All I do is carry out the job given to me."

The Commander of the Military Police Brigade. He is known for using a laissez-faire approach to command, allowing widespread under-the-table corruption and profiteering to run rampant in the MPs (albeit he himself is a decent, but resigned man). He and Erwin were friends during their time as Trainees, and intended to join the Survey Corps together. He abandoned his friend in favor of marrying Marie, a woman they both loved, and started a family in the safety of the Interior. Though they come into conflict due to their positions, he is someone Erwin trusts enough to disclose sensitive information. 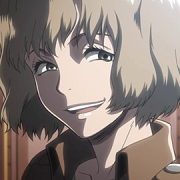 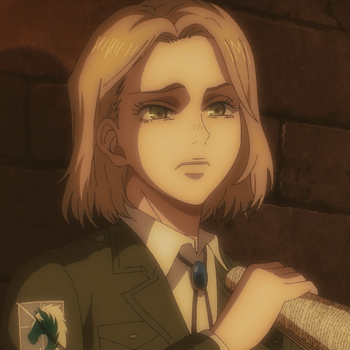 "Yeah, this place is even more rotten than I thought it'd be. Of course, that's why I chose it."

A rookie assigned to the same squad as Annie, stationed in Stohess District of Wall Sina. She is an obnoxious and outspoken girl, who joined the Military Police Brigade in order to benefit from their corruption. She shares a room with Annie, and frequently pesters her antisocial roommate. She and Marlowe graduated from the 104th like the rest of the main cast, but they were not in the Southern Branch like the rest of the cadets shown, both ranking in the Top 10 of their respective branches. 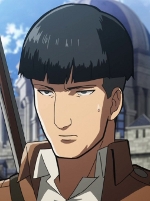 "They'll learn that a man without reason is no different from an animal who defecates wherever it pleases."

A member of Annie's unit. He is an idealistic and hard-working young man, which causes others to dump their work on him. Like Hitch and Boris, he's a cadet of the 104th, but from a different branch than the main cast, ranking in the Top 10 of said branch. 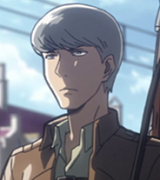 "She's just back from seeing hell. No one gets over that right away."

A member of Annie's unit. He expresses sympathy for Annie's situation as a survivor of Trost and accuses Hitch of gaining entry into the branch through illicit means. He is a cadet of the 104th of a different branch from the main cast, ranking among the Top 10 of his branch.

A rookie cadet hailing from the Southern Branch of the 104th Trainee Corps and the only cadet from that branch's top ten who joined the Military Police.

See the Annie Leonhart character page for tropes about Annie.

General Tropes
Also known as the Interior Police, a mysterious branch that operates out of the Capitol at Mitras, with little connection to the main branch. Their members and duties are shrouded in mystery, with even Commander Nile Dawk admitting he knows little about them. Responsible for guarding the many secrets of the government, their duties involve silencing anyone seen as a threat to their masters.
Djel Sanes 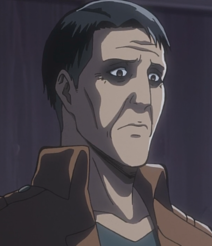 A senior member of the Military Police Brigade, from the mysterious 1st Brigade stationed in the Capitol. He oversees the investigation of Pastor Nick's murder. However, Hange suspects he is in fact responsible for the priest's torture and murder, and is part of a conspiracy within the government. 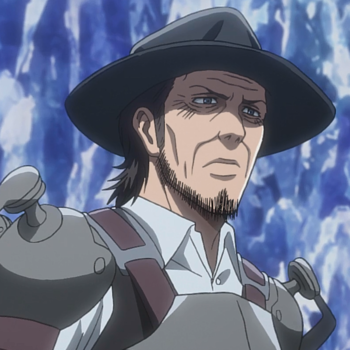 "Everyone I've seen... has been like that. Be it alcohol, women, or even God... family, the king, dreams, children, power... without being drunk on something, no one could have done what they did. Everyone... was a slave to something."

The captain of the 1st Brigade's Anti-Personnel Suppression Squad. A former serial killer that stalked the Capitol in decades past, he now kills for the sake of the government. He is the man responsible for murdering Historia's mother, and was once Levi's caretaker and trainer (and is later revealed to be his maternal uncle). Although he serves as the The Dragon to Rod Reiss, something beyond mere loyalty to the crown appears to motivate him. 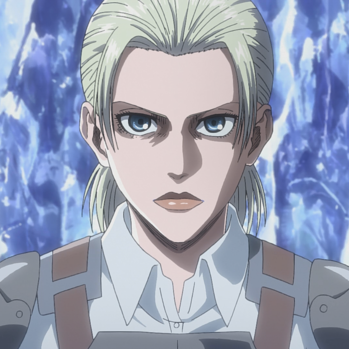