WARNING: This page contains HUGE unmarked spoilers from manga Chapters 86 and on. Beware if you are not updated with the manga. 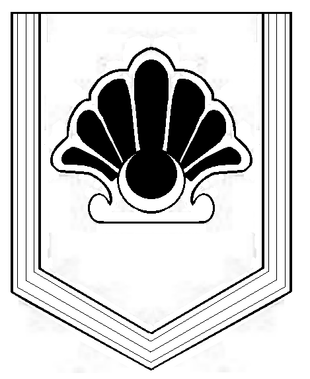 The National Emblem of Marley, a seashell with seven divisions, symbolizing the seven Titan Powers appropriated from the Eldians
Advertisement:

Marley is a massive imperialist nation from beyond the Walls which dominates most of the continent west from the island of Paradis, where the Walls are located. Formerly a kingdom, in their history they claim to have been the subjects of persecution and ethnic cleansing by the Eldian Empire, until the latter became fractured and the Eldian clans started fighting each other, which they used as an opportunity to steal seven of the Nine Titan powers from the Eldians. With those they were able to turn the tables on their oppressors and made them flee to Paradis, thus leading Marley to become the new dominant superpower through military might. After eighty years of their victory (and roughly twenty years before the start of the story) they set their sights on the island of Paradis to secure its strategic natural resources and to eradicate the Eldians of the Three Walls.

Marley was formally introduced through Grisha Yeager's written testimony found in his basement in Chapters 86 through 90, though there have been scattered hints of Marley's existence earlier in the manga, and even earlier in the anime note Through the adaptation of Ymir's background story. They are the main engineers of the Titan attacks on the Three Walls of Paradis, intended to besiege the Eldians, and later, appropriate the Coordinate Titan for their own purposes and take control of the island through the use of the Warriors, indoctrinated Eldians holding the Titan Powers the Marleyans appropriated during the Great Titan War.

Tropes that apply to Marley as a whole. 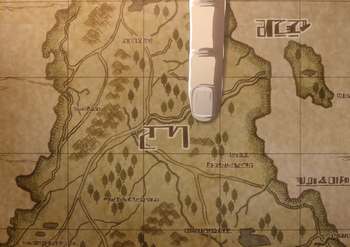 *Note: Due to Marley's story being shown almost exclusively from the Military's perspective, exposing little of its society, this section covers tropes for both the Marleyan military, and its population as a whole.

The closest thing to Marley's government that has been seen. For all intents and purposes, they are the force controlling the country unknowingly just below the Tybur family.

"Do we not have any Titans with wings?" 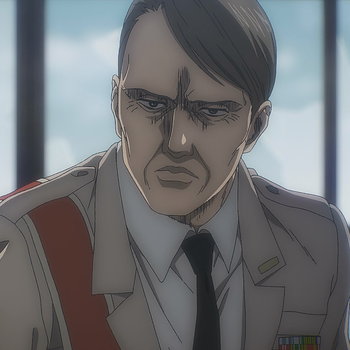 A high-ranking member of the Marleyan military, and the commander-in-chief of the Marleyan Army and Navy; he gives Zeke the green-light to invade Paradis before his time is up. 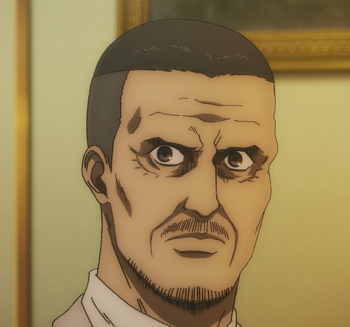 "Everyone, remember this: I'm the one who dealt the first blow."

A captain from the Marleyan army and the commanding officer of the Warrior Unit. He led the Eldian unit assigned to take Fort Slava. 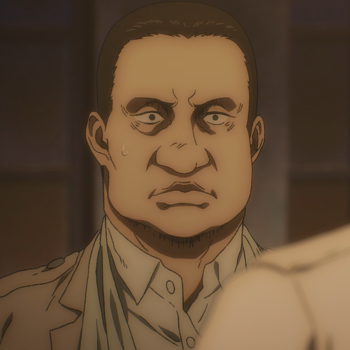 A Marleyan soldier who fought with Magath's unit against the Mid-East Allied Forces. 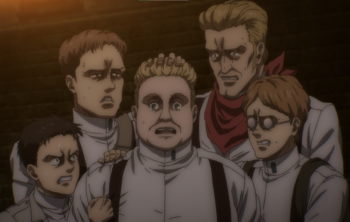 Marleyan soldiers belonging to a specialized unit, serving as the crew for the Cart Titan. 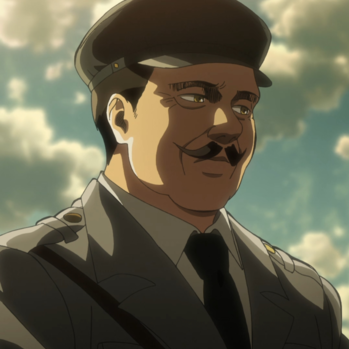 "If you leave rats in your household alone, you might be infected with a disease sooner or later, so the desire to eliminate them is natural."

A member of the Public Security Bureau overseeing the Liberio Ghetto in Marley. He later is shown to have risen in rank as one of the commanding officers in the Marleyan army tasked with sending off the captive Eldian revolutionaries to Paradis Island. A stocky, mustached man. 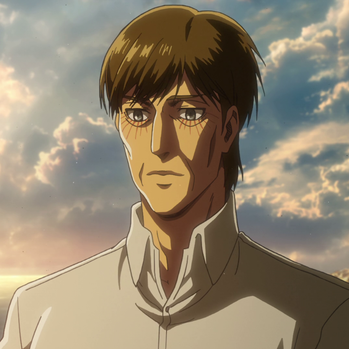 "How about it? Is this entertaining for you?."

Gross' right-hand man and second-in-command. A lanky, morose man. He's interested in personally interrogating Grisha instead of just transforming him into a mindless Titan like the rest of the revolutionaries. Kruger is actually "The Owl", the hidden informant of the Eldian Restorationists. He was also the Attack Titan before giving it to Grisha. 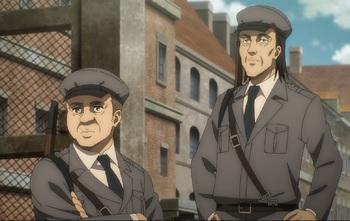 A pair of Marleyan soldiers responsible for overseeing the checkpoint into Liberio Internment Zone. 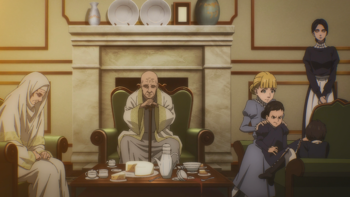 The Tybur family is a wealthy and influential family of Eldians living in large mansions on sprawling grounds as "honorary Marleyans" in the Kingdom of Marley, far removed from the ghettos that most Eldians are forced into. They are renowned worldwide for being the first noble Eldian family to rebel against King Fritz during the Great Titan War 100 years ago. However, they have historically taken a stance of non-intervention in politics and war since, and as such are implied to be highly divisive figures for Marleyans and the subjugated Eldians alike. In the aftermath of the Great Titan War, it's revealed that the head of the Tybur Family is the true power behind Marley but before Willy none of them have actually tried to run the country.

They are currently in possession of the "War Hammer Titan", one of the Nine Titan Powers of Ymir. Though they have never used their Titan Power to directly assist Marley in war before, they are allegedly planning to help attack the Island of Paradis to reclaim the Founding Titan for Marley.

" Here and now, as representative of the Marleyan government, I proclaim to the enemy forces of Paradis a declaration of war!" 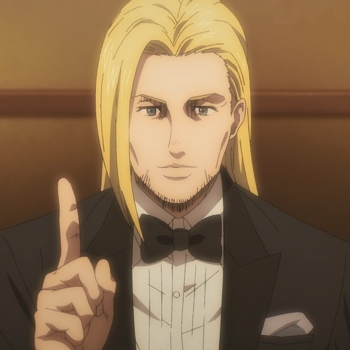 The current head of the Tybur family. He travels from his family's estate to attend the festival, and announces his intention to make an important speech. 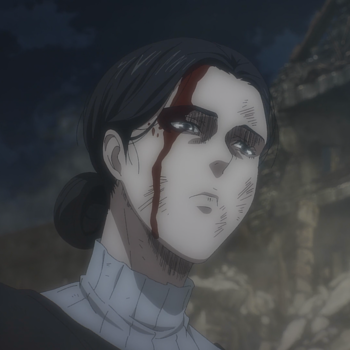 The sister of Willy Tybur, lingering quietly at his side. The true identity of the War Hammer Titan. 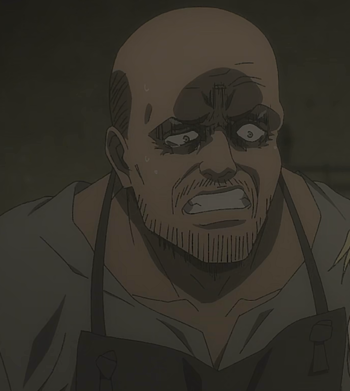 A Marleyan civilian, employed by the military as a laborer that works in the barracks kitchens. He had an illicit affair with Karina Braun when they worked together, resulting in the birth of their son. 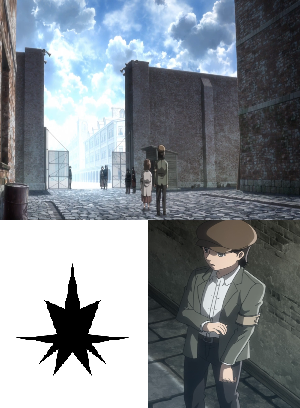 TOP: Liberio's checkpoint; LEFT: The Eldian Nine-Pointed Star; RIGHT: A young Grisha Yeager wearing an armband identifying him as an Eldian at Liberio

The nation of Marley keeps its Eldian citizens in designated Internment Zones, or Ghettos, one of which is located in the Marleyan city of Liberio (AKA Rebellio depending on the translator). The residents live in impoverished conditions and are subject to inhumane treatment. Many of the residents are believers in the tale of Eldian atrocities, and vocally express support for Marley... at least to avoid being reported to authorities. The families of the Warriors and Warrior candidates all dwell here. The Eldians of the ghettos are identified by their armbands depicting the Nine-Pointed Star, the symbol of Eldia outside Paradis.

As mentioned earlier in this page, most, if not all, of the members of the Warrior Unit come from Liberio.

Residents of the Liberio Internment Zone: 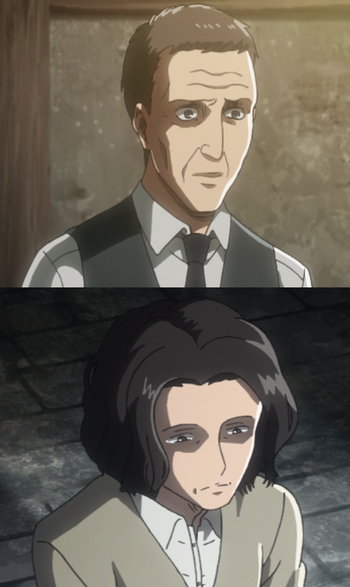 Grisha and Faye's parents and, by extension, Eren and Zeke's grandparents. A physician with a practice in Liberio and his wife, they lived with and raised their children in the Marley's Liberio ghetto, and several years later they were left with the care of a young Zeke after Grisha and Dina were convicted of conspiring against the Marleyan government.
Faye Yeager 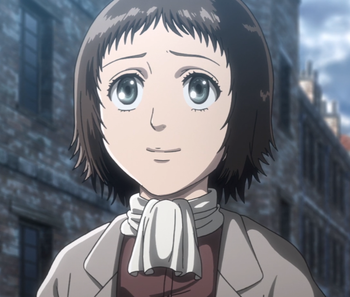 Grisha's eight year-old younger sister, who was taken beyond their ghetto by him, separated from her brother, and later found dead. 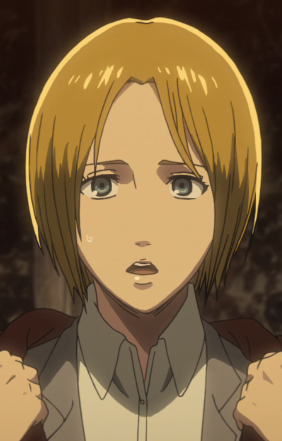 A member of the Fritz family and one of those who didn't flee to the Walls, Grisha's first wife, and the mother of Zeke.

For tropes related to the Eldian Royal Family in Paradis, see the Eldia character page. 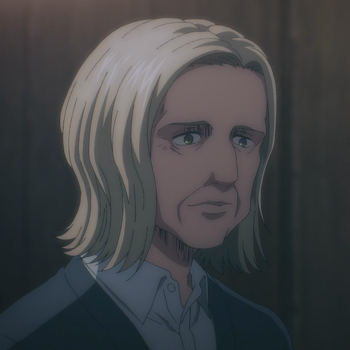 The mother of Reiner Braun, who once had an affair with a Marleyan. She is a fierce supporter of Marley, indoctrinating her son from an early age. 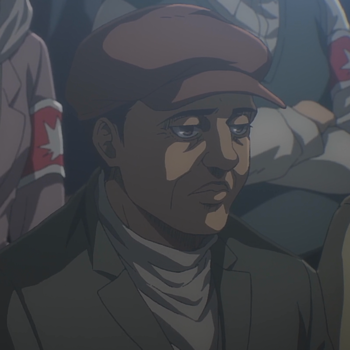 The adoptive father of Annie Leonhart, who subjected her to harsh combat training as a child. 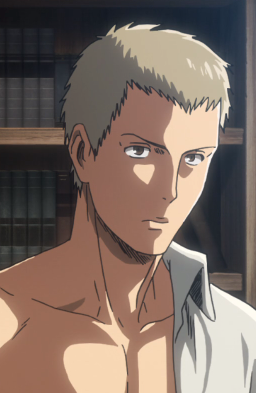 Grice was a militant member of the Eldia Restorationists and the person responsible for bringing Grisha Yeager into the faction. Grice was the uncle of the Warrior candidates Falco and Colt Grice. 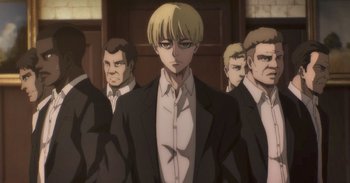 A faction of (mainly) forcefully conscripted individuals within Marley's military forces, secretly opposed to the government and organized under the leadership of Zeke Yeager. They are responsible for providing Paradis with modern technology and kick-starting the island's industrialization.

"Two brothers are going to remake the world. I just want to have a good view of the action." 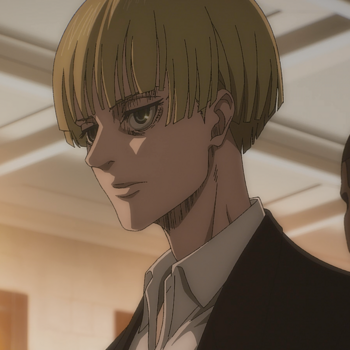 Zeke's right-hand woman, a foreign soldier in the Marleyan army that establishes an alliance with Paradis Island.

"We all exist because we were wanted, just the way we are." 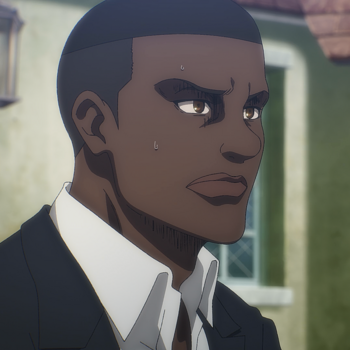 A foreign soldier in the Marleyan army that went to become allied with the Survey Corps, serving as their airship pilot. 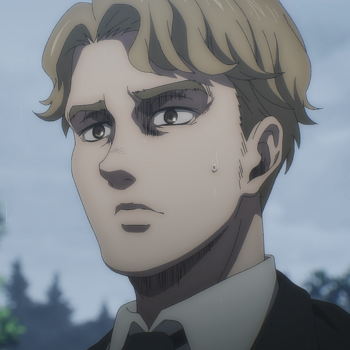 A Marleyan soldier sent to survey Paradis Island. He is initially xenophobic against the Eldians upon being captured at the Paradis shoreline. A cook by trade, Nikolo abandons his military mission in order to become a chef after meeting Sasha Braus, thus coming directly under the employ of the Eldian military high command as their personal chef. 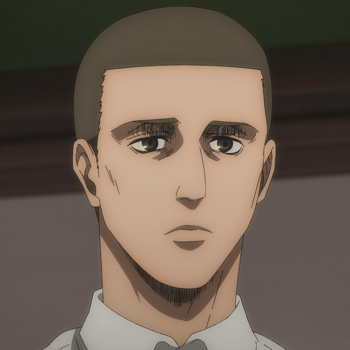 Another Marleyan soldier who was sent to survey Paradis Island. Upon capture, his was placed in a restaurant as a waiter for the military officials on Paradis Island. 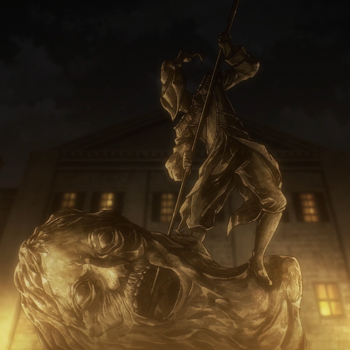 Statue at Liberio depicting Helos slaying the Devil of the Earth

A Marleyan soldier who is said to have killed the Devil of the Earth and successfully driven the King of the Eldians and his people into exile during the Great Titan War. He is considered the national hero of Marley.