"We grip two steel blades of glory,
Ours is the song of victory,
And have the Wings of Freedom on our backs.
With our determination tightly held onto our hearts,
We sever this cycle of folly,
And dance into the blue sky—
With Wings of Freedom!"
—Lyrics from the second anime opening

Also known as the Scout Regiment (or Legion, depending on the translator), they're the branch of the military in charge of exploring and reclaiming territory lost to the Titans. They are noted to have an exceptionally high mortality rate, with only a 50% chance of surviving their first mission. However, those that become veterans are considered the most skilled soldiers humanity has at its disposal. Their sigil is called "The Wings of Freedom", which is sometimes used to refer to the branch as a whole. The Survey Corps' fundamental tactics are based on effective and rapid mobilization of troops through the use of cavalry, and the mastery of the 3DM gear for melee combat with Titans.

Originally created by the Royal Government as cannon fodder to quell the population's curiosity regarding the outside of the Walls, the members of the Corps divide the opinion of bystanders, who see them as both heroes and madmen; in spite of this, the Corps have gradually pushed for both logistics and tactics that aid them in their quests, such as the original introduction of the 3DM Gearnote As seen on Before The Fall, the Corps began as a cavalry unit until direct combat with Titans forced them to adopt the technology. Because of the fall of Wall Maria, significant resources and improvements have been routed to the different branches of the military, and the Survey Corps has thus far improved considerably under the revolutionary command of Erwin Smith, the investigatory efforts of Hange Zoe and the leadership and combative capabilities of Levi Ackerman.

As a result of the Battle of Trost, most of the top ten cadets from the Southern Branch of the 104th Trainee Corps join the Survey Corps, thus focusing the story on this branch of the military.

open/close all folders
General Tropes
Tropes that apply to the Survey Corps as a whole.
Erwin Smith

"What do you think the enemy is?"
"If you begin to regret, you'll dull your future decisions and let others make your choices for you. All that's left for you then is to die. Nobody can foretell the outcome. Each decision you make holds meaning only by affecting your next decision."

The 13th Commander of the Survey Corps. He is noted for his brilliant and resourceful mind, having created new tactics that greatly reduced losses during operations. However, he has the capacity to be exceptionally ruthless in pursuit of the goal to protect humanity. He uses the recruitment ceremony and subsequent expedition outside the Walls to lure the Titan Shifters infiltrating the military into making a move, and aggressively hunts for them within the Survey Corps.

"The only thing we're allowed to do is to believe that we won't regret the choice we made."
"I want to put an end to that recurring nightmare, right now. There are those who would get in my way. But I'm fine playing the role of the lunatic who kills people like that. I have to be ready to rearrange some faces. Because I choose the hell of humans killing each other over the hell of being eaten."

A Captain in the Survey Corps, rumored to be the strongest soldier alive. He has a harsh and unsocial personality, but is well-regarded by his subordinates. He is injured in the aftermath of the first encounter with the Female Titan, and forced onto the sidelines during the subsequent battles. Once his injuries have sufficiently healed, he is placed in charge of protecting Eren once more and forms a new Special Operations Squad to assist him.

He is the main protagonist of the visual novel Attack on Titan: A Choice With No Regrets, a prequel detailing how he got into the Survey Corps. 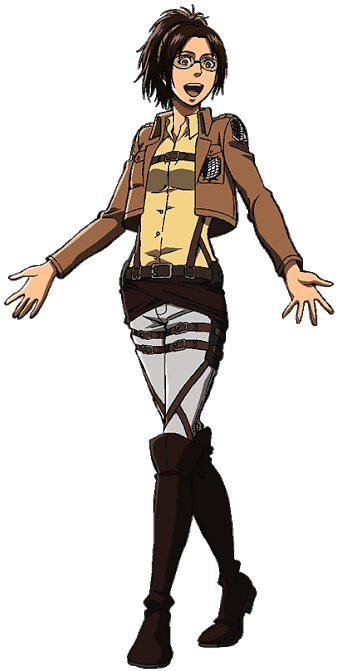 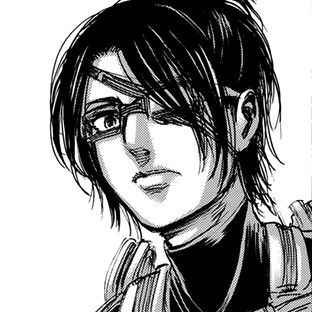 "I tried fighting the Titans with hatred for decades. Now I want to try looking at them from a different point of view than everyone else."

Leader of the 4th Squad. Deeply involved in Titan research and regarded as something of an eccentric as a result. Hange is given the responsibility of studying Eren's Titan powers, as well as creating a suitable trap for the mission outside the Walls. Hange is later entrusted with supervising Pastor Nick, and is enraged when he is murdered at the hands of the corrupt 1st Central Branch of the Military Police Brigade. After being named Acting Commander of the Survey Corps by Erwin Smith, Hange, with help from the common people, ignites a revolution within the walls against the ruling powers; following Erwin's demise, she formally becomes the 14th Commander of the Survey Corps, being the highest ranked officer available. While presented as an individual with an ambiguous gender in the manga, Hange is presented as a woman in the anime adaptation. 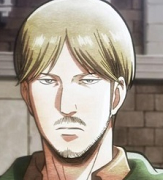 "We will have lost only the moment humans give up fighting."

A highly regarded officer, considered second only to Levi in terms of strength. He has an unusually sensitive nose, allowing him to detect the stench of Titans over a distance. He's placed in charge of guarding and observing the new recruits suspected of being The Mole. However, during the attack within Wall Rose, he goes off alone to buy the others time and ends up being killed after encountering the Beast Titan.

In General
Levi's handpicked elite squad, composed of Petra Ral, Eld Jinn, Oluo Bozado, and Gunther Schultz. When the Survey Corps is given custody of Eren, Levi charges them with keeping him in check. They encourage Eren to place his trust in them, and flee from battle rather than fight the Female Titan head on. While initially able to gain the upper-hand against the Female Titan using their superior teamwork, all are quickly slain when she reveals previously unseen powers.
Petra Ral 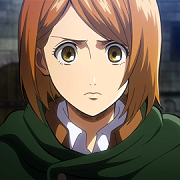 A member of Levi's squad, she is kind-hearted and devoted to her comrades. When Eren joins them, she takes him under her wing and encourages him to place his trust in his new comrades. She is the second to last to die in battle with the Female Titan. 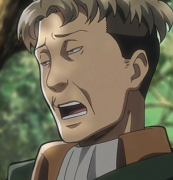 A member of the Special Operations Squad, handpicked by Levi. He seems like a comical and incompetent man, but is actually an exceptional soldier with an incredibly high kill count. He is the final member to die at the hands of the Female Titan. 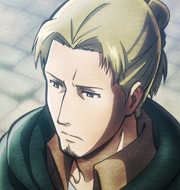 A member of the Special Operations Squad, handpicked by Levi to guard Eren. He is the second member to be killed by the Female Titan, leaving Petra and Oluo deeply shaken. 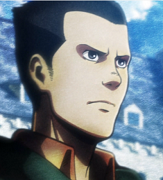 A member of the Special Operations Squad, handpicked by Levi to guard Eren. He is the first to be killed by the Female Titan, when she ambushes the Squad in human form.

After the demise of his Special Operation Squad at the hands of the Female Titan, a new team is formed out of necessity out of the new cadets, forming a new Team Levi that operates henceforth. Unlike the previous iteration, this new team also operates under the leadership of Hange Zoe as well.

In General
Mike's squad, charged with guarding the new recruits in the Breach arc. They have great concern for their younger comrades, risking much to keep them safe. During the siege of Castle Utgard, they are overwhelmed and eventually, picked off as their supplies of gas and blades run out.
Nanaba 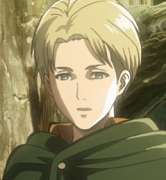 An experienced and capable soldier, charged with guarding members of the new recruits from the 104th. She's killed during the attack on Castle Utgard.

An experienced and capable soldier, charged with guarding members of the new recruits from the 104th. She is eventually killed when the Beast Titan hurls pieces of the Wall at Castle Utgard.

An experienced and capable soldier, charged with guarding members of the new recruits from the 104th. He is killed during the night attack on Castle Utgard, after running out of gas.

An experienced and capable soldier, charged with guarding members of the new recruits from the 104th. He is eventually killed when the Beast Titan hurls pieces of the Wall at Castle Utgard.

In General
Hange’s primary squad is composed of Moblit Berner, Nifa, Keiji, and an unnamed member. They work closely with the commanding officers of the Survey Corps and were among the few who knew about the truth regarding the 57th Expedition and thus played an active role in Erwin’s plan to capture the Female Titan. Hange’s squad was also in charge of rescuing the survivors at Castle Utgard, and took part in the uprising against the monarchy, where they, save for Moblit, met their end at the hands of the Central Military Police.
Moblit Berner 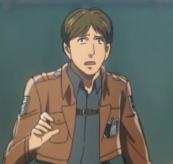 Deputy Squad Leader of the 4th Squad. He often acts as Hange's research assistant and struggles to keep Hange out of harm's way. He was badly injured during the battle with the traitors, but recovers in time to help in the investigation of the Central Brigade and uprising against the government. 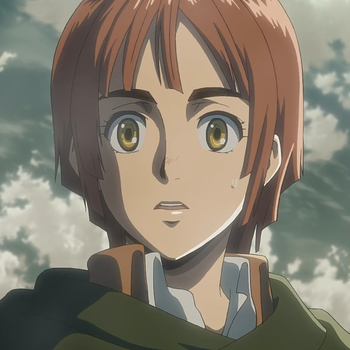 A member of the 4th Squad, under the command of Hange Zoë. An observant and devoted soldier, she is entrusted to handle several matters of a sensitive nature. She is killed when the 1st Brigade's Suppression Squad ambushes the Survey Corps. 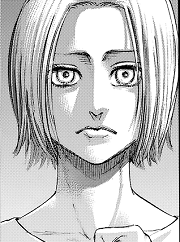 A resident from Trost District, inspired to join the Survey Corps after Mikasa saved her as a child. 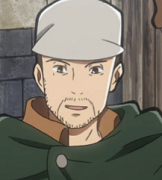 The initial Squad Leader for the new recruits, and later Armin's squad leader during the 57th expedition. He is a kind-hearted man, and has a strong bond with his personal horse, Shallot. He is among the Female Titan's first victims. 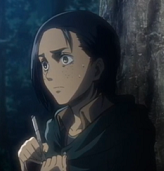 A member of the 34th expedition, and the last survivor of her unit. Her notebook of her experiences with the Survey Corps were found after her death.

A soldier taking part in the 57th Expedition. His desperation to reclaim the body of his fallen friend places the formation in danger.

Following the defeat of the Royal Government and the institution of Historia Reiss as Queen of the Walls, the military's attention veers towards the recovery of Wall Maria, making many members of the MPs and the Garrison choose to join the Survey Corps to aid in the portentous mission.

A graduate of the 104th Trainee Corps, originally from the Military Police, who joins the Survey Corps having expressed his interest to do so during the Uprising. See the Military Police Brigade character page for more information.

A Choice With No Regrets Characters

Debut: No Regrets Chapter 0 (Manga), A Choice with No Regrets: Part One (Anime OVA) 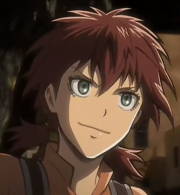 A member of the criminal gang led by Levi, recruited by force into the Survey Corps by Erwin Smith. Levi rescued her from starving as a child, and she worshiped him as a surrogate older brother. Energetic and tomboyish, she was often teased for not being very intelligent. She was killed in action during an expedition.

Debut: No Regrets Chapter 0 (Manga), A Choice with No Regrets: Part One (Anime OVA) 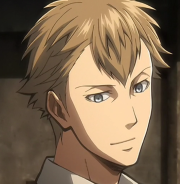 A member of the criminal gang led by Levi, recruited by force into the Survey Corps by Erwin Smith. He is serious and highly intelligent, often serving as the schemer and strategist of the group. He was eventually killed in action during an expedition. 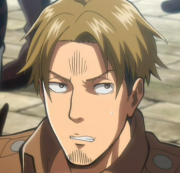 A Squad Leader in the Survey Corps. Levi, Isabel, and Farlan are assigned to his squad, though he has great difficulty accepting former criminals into his team. He was killed in action during Levi's first expedition.

The predecessor of Erwin at the command of the Survey Corps, now a drill sergeant at the Trainee Corps.

See the Other Characters page.