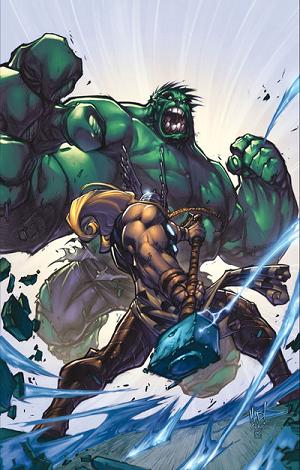 Can't we all just get along?
"As intelligent men facing lunatic times, we were very alike, despising each other instantly. Recognizing me, he attacked anyway, 'Mistaking me for a criminal.'"
— Ozymandias (discussing The Comedian), Watchmen
Advertisement:

Alice and Bob are heroes. Bonafide heroes. They beat the bad guys, they save the world, they help old ladies across the street, the whole nine yards.

They also hate each other's guts, perhaps even worse than they do their enemies.

Headbutting Heroes refers to when two heroes thoroughly hate each other, or when one hero hates another hero (it doesn't have to be mutual). This is not the same as the animosity that can form between, say, a Lancer and his superior, since, while they may have animosity against each other, the Lancer deep down respects the Hero and will defer to his leadership. It's also different from Let's You and Him Fight, since the heroes have not been misled to face each other. They really want to duke it out every time they meet, or at the very least they are obviously disagreeable and might try to discredit each other in front of other heroes. They just cannot get along, no matter how others might try to get them to keep it civil.

There need not be actual violence involved in the feud, though. As said before, they might try to discredit each other, or have verbal spats. If there is a threat, they will face that threat, but this will practically never lead to them getting along. In fact, their animosity might even become a hindrance to the situation at hand, and they might get called on it by other heroes sick and tired of their bickering.

The reasons for such animosity are various, but they are rarely very deep. Truly worthwhile reasons for disagreement are also usually reasons they could mediate if they actually sat down and talked it out. However, part of what makes this trope is that the two heroes, deep down, don't NEED an excuse to fight. They just hate each other, and while they might have such a thing as a GOOD reason to fight, it's pretty much secondary to the hatred that has formed between them. Their reasons for disagreement could disappear, they could both grow more mature and understanding, and they'd STILL hate each other.

Examples of reasons for these characters hatred for each other might include:

Quite obviously, Anti Heroes are VERY prone to this type of relationship with certain other types of heroes. It's almost a prerequisite of being an unscrupulous Chaotic Good hero that a hardass Lawful Good hero will hate your guts. Sociopathic heroes are also prone to this, for obvious reasons.

Subtrope of Divided We Fall that involves individuals rather than factions. Compare to Teeth-Clenched Teamwork, where, while hating each other, the heroes are willing to set aside their difference for the sake of doing what's right. Fighting the Lancer is when the teammates can't set aside their differences, and comes to blows. Compare Dueling Messiahs where it's both heroes who are like this with each other due to their conflicting methods in protecting the world. See also No Sympathy Between Mooks for the villainous version. Also contrast Villainous Friendship where two villains are the best of friends. If the two characters argue often, but are also genuinely good friends, that's Vitriolic Best Buds.

Was it you or your egg?

Monk and Pochiro will turn literally anything into an argument, so when the unsolvable Trope Namer comes up, naturally they'd snap at each other about it. Their teammates suggest asking Tart, the Zodiac Chicken Spirit, might settle the debate. Of course she'd know about her own species's origins, right...?

Was it you or your egg?

Monk and Pochiro will turn literally anything into an argument, so when the unsolvable Trope Namer comes up, naturally they'd snap at each other about it. Their teammates suggest asking Tart, the Zodiac Chicken Spirit, might settle the debate. Of course she'd know about her own species's origins, right...?