Meliodas of The Seven Deadly Sins. 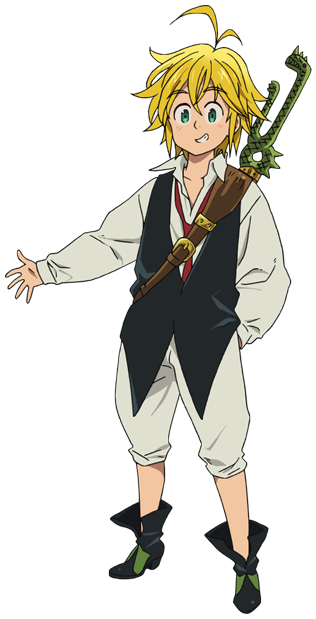 Meliodas is the leader of the Seven Deadly Sins and is known as the Dragon's Sin of Wrath. As a good deal of the overall plot involves him, he is the primary main male protagonist of the series.

Upon being found by Elizabeth at the start of the series, Meliodas decided to help her find the other Sins in order to stop the Holy Knights who had taken over her kingdom. Despite looking like a human child, Meliodas is actually a member of the Demon Clan. That said, he has lived for over 3000 years which is three times the average lifespan of a regular demon. This is because of a certain curse which was placed upon him.

Meliodas is also a former Holy Knight of the kingdom of Danafor. However due to certain reasons, his uncontrolled wrath caused him to completely obliterate the kingdom.

A-C
D-G
H-K
L-O
Ban: Hey Meliodas, did you fight your way all the way back from the purgatory just to have double lover's suicide with the princess here?
P-Z