Literature / All Our Yesterdays 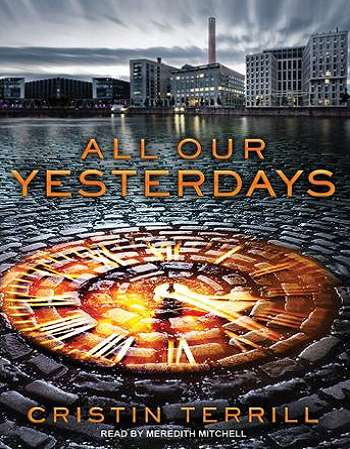 All Our Yesterdays is a Young Adult Time Travel novel written by Cristin Terrel.
Advertisement:

In the future, Em lives a life of torment. Imprisoned and tortured every day as endless war rages outside, her only chance to set things right is to go back in time alongside her best friend, Finn, and kill the one who built the time machine and caused the future to end. Nothing else has worked, leaving death as the only option, and with the sadistic doctor catching onto her, this is her final chance to save the future.

In the past, Marina knows nothing of this—she's happy to see her James again, even if she doesn't always understand his theories, and finds Finn an annoyance at best. Marina is hopeful that James reciprocates her feelings, but when his brother is suddenly killed under suspicious circumstances, all her hopes for the future collapse into the desire to keep him safe at any cost.

Em and Marina are on a collision course, as they're both the same person at different points in time—and only one future can survive.