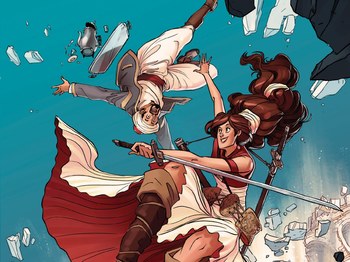 Delilah Dirk and the Turkish Lieutenant

is a 180-page graphic novel published by First Second Books in 2013. The first in the series, it introduces Delilah Dirk and follows Selim as he tries desperately to repay the debt he owes her for having saved his life. The first chapter was published independently in 2007 as Delilah Dirk and the Treasures of Constantinople and nominated for an Eisner award in that format. The third chapter was published independently in 2008 as part of the FLIGHT comics anthology, volume 5, as Delilah Dirk and the Aqueduct. Those chapters were bridged by additional material to create The Turkish Lieutenant, which was released as a serialized webcomic beginning in 2011.

Delilah Dirk and the King's Shilling

Delilah Dirk and the Pillars of Hercules

Delilah Dirk and the Seeds of Good Fortune