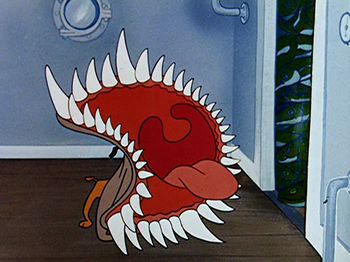 Believe it or not, that's a dog!
Advertisement:

The Legend of Rockabye Point is a 1955 animated short film (six minutes) directed by Tex Avery, produced by Walter Lantz.

An old sea captain tells the viewer of the legend of Rockabye Point. It seems that some twenty years ago, the sea captain came to that particular spot in the far north to catch some bluefin tuna. His cargo of tuna catches the attention of a hungry polar bear named Charlie, as well as everybody's favorite penguin, Chilly Willy. The bear tries repeatedly to sneak onto the boat and steal some tuna, but has to deal with a very aggressive guard dog who keeps plunging his teeth into Charlie's backside. Chilly Willy, who also wants the tuna, contrives to sic the dog onto poor Charlie.

Daws Butler voiced both the bear and the guard dog.