Feel free to contribute. Not all spoilers are marked, so proceed at your own peril. 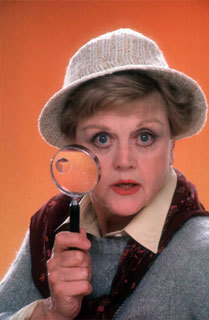 "There are three things you can never have enough of in life, Lieutenant: chocolate, friends and the theatre."

"Hello! How do you do? I'm Jessica Fletcher."

The protagonist and emerging mystery writer from the fictional town of Cabot Cove, Maine. She's a very nice, sweet old lady with impeccable manners, polished vocabulary and a very gentle disposition. Initially just an ordinary, widowed teacher until her nephew Grady sent a manuscript (against her consent, of course), which she wrote in her spare time, to a publisher. To the surprise of no one, Jessica became an international phenomenon in the field of mystery fiction. In later seasons, she takes up a Criminology teaching position in college.

Jessica, or Mrs. Fletcher as she is affectionately called, has an extremely inquisitive mind, near-photographic memory, and a brilliant gift for noticing the tiny details that even the most talented criminals ignore, which ultimately lead these criminals to their doom. Even when it's obvious that Jessica is far more qualified for the job than, say, a bumbling sheriff, she is very respectful of authority figures - even if they are either absolutely incompetent or huge dicks. She is best known, however, for her mastery of strategies and plans to ultimately corner the culprits.

The sheriff of Cabot Cove, Maine. He's the resident bumbling cop as well as one of Jessica's many friends.

Sheriff of Cabot Cove after Amos's retirement. He used to be a cop in New York, coming to Cabot Cove for a more quiet life.

A resident doctor of Cabot Cove and a close friend of Jessica's.
Grady Ambrose Fletcher

Jessica Fletcher's recurring nephew. Both his love life and profession have a tendency to go downhill very quickly.
Michael Hagarty

A friend of Jessica's that works for MI6. As he is a spy, Hagarty's cases tend to be international incidents.

A private detective Jessica meets and befriends in New York.

A former thief who's now gone straight... er. He first appears in the episode "A Little Night Work".

Homicide detectives who work with Jessica on several New York cases (usually but not always together).

The Mayor of Cabot Cove

Charlie Garrett
‘’’Played By:’’’ Wayne Rogers
A down-on-his luck, private detective who sometimes works with or encounters Jessica in the final seasons.