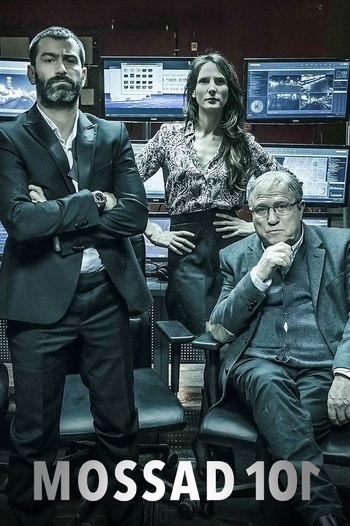 Mossad 101 (also known as Hamidrasha) is an Israeli TV series from 2015, revovlving around a secret, uncoventional elite training course of special Mossad agents. The show stars Yehuda Levi as Yona Harari, a particularly unfettered special agent, who has a problem with authority, traditions and rules, amongst many other things. Harari was put in charge of recruiting and training new agents after being involved with some sort of operational mishap in Bulgaria. He picks himself a Ragtag Bunch of Misfits to train and filter out in unusual ways. Alongside Yonah, the course is lead by retired agent Simon, and his ex-wife, Avigail, a senior agent, stationed there to ensure he doesn't let things get out of hand.

Second season, Darker and Edgier, takes part in Kiev, where Yona, together with three best trainees, leads his own investigation. Among the opponents, Islamic State, drug dealers and moles. In order to achieve his goal, Yona creates an unlikely alliance with the notorious Israeli criminal Liron Hariri, who seems more interested in killing Yona in avenge for his father

Due to the unpredictable nature of the show, all spoilers will remain unmarked.