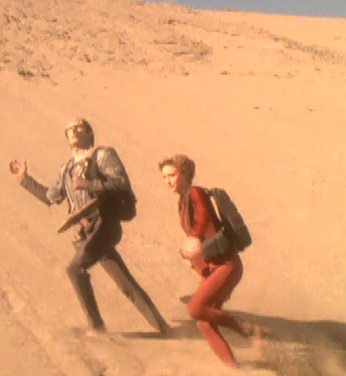 Just two mortal enemies, trekking through the desert
Recovered wreckage points to the location of a Cardassian ship that was carrying Bajoran prisoners that disappeared just before the end of the Occupation, including the man who recruited Major Kira into the Resistance. She sets out to find the ship, but the Cardassians want one of their officers to accompany her — Dukat, much to her chagrin, and it turns out that he too has some personal interest in this ship. Meanwhile, Kasidy Yates has news that makes Sisko a bit uncomfortable.