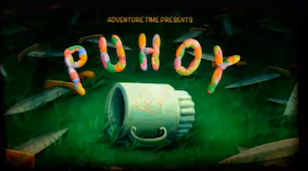 Stuck inside the treehouse during a sword storm, Jake builds a pillow fort while Finn goes to a different world.