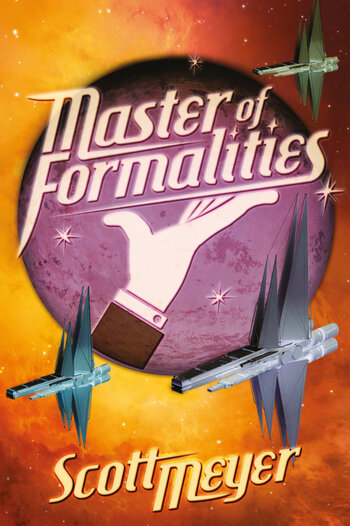 "Know that two thousand, one hundred, and seventy-one conventional years have passed since the Terran Exodus. Today is the fifty-sixth day of the third month. We meet on the planet Apios, in the servants' hall of Palace Koa, the ancestral home of House Jakabitus and its matriarch, Lady Joanadie Jakabitus. I am Wollard, Master of Formalities for House Jakabitus, and I am currently delivering the daily meeting to the palace staff."
Advertisement:

As indicated by the opening quote (which are the first words in the novel), the novel takes place in the Feudal Future. Since the Terran Exodus, colonies have developed independently, eventually developing very diverse cultures. To avoid problems caused by miscommunication, the great houses have created the Arbiters, an independent body of judges who live on the planet Central Authority, who in turn created the Masters of Formalities. Masters of Formalities are assigned to noble houses to advise their rulers on the proper forms and precedents when dealing with other nobles. The majority of the plot takes place on the planet Apios, a fairly decent planet with a long line of good rulers. House Jakabitus has been engaged in a centuries-long war with the vile and brutish Hahn Empire, another noble house that rules the Hahn Home World (that's the official name of the planet), forcing a culture focused on making others as miserable as possible. Until recently, the "war" has consisted of a generations-long stalemate on the chosen planet Ophion 6 due to the presence of numerous Kill Sats of both sides in orbit, ensuring a Mutually Assured Destruction of sorts. However, the Hahn then start making raids on foot using hand-to-hand combat, a tactic that has been largely forgotten by most civilized worlds due to the presence of devastating long-range weapons.

One battle results in the capture of Hennik Hahn, the son of Lord Kamar Hahn, the undisputed ruler of the Hahn Home World. Not quite sure what to do with him, Lady Joanadie Jakabitus refuses to go with any plan that calls for Hennick to be killed or harmed in any way. Her Master of Formalities Wollard suggests that she adopt the boy instead, perhaps teach him to be more benevolent. She agrees with some reservation. Henneck turns out to be a true Hahn and a great annoyance to both the members of House Jakabitus and their servants. Hilarity Ensues.

Good form dictates that you should thank everyone who contributed to this article.