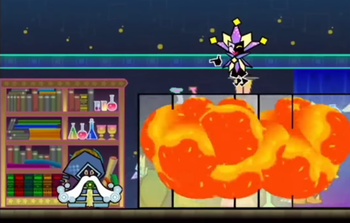 Even in Mario you should Beware the Silly Ones
"After you walk into a village and you see 50 children, all sitting neatly in a row, against a church wall, each with their throats cut and their hands chopped off, you realize that the creature that could do this doesn't have a soul."
— Niko Bellic, Grand Theft Auto IV

Video Games with their own pages