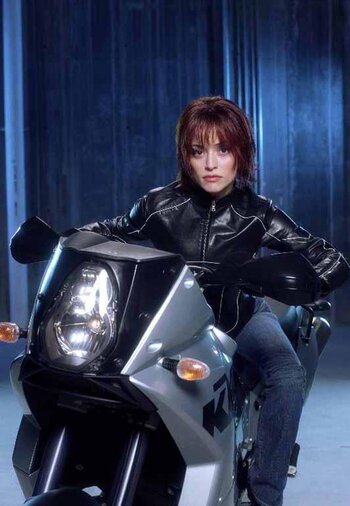 Before being into cars, Nikki was into bikes.
Advertisement:

A 2005 TV movie by the Sci-Fi Channel, very loosely based on the comic book of the same name.

Jane Elizabeth Browning, a female US Special Forces soldier, is sent to Chechnya with the Painkiller Unit to shut down a drug lab. At the site, they find it's creating a biochemical weapon instead, to which they're exposed. While attempting to retreat, they're attacked by armed men in Hazmat suits, who kill them all. Except for Jane, naturally, who then wakes up in a military facility, finding that her multiple gunshot wounds are healed after only a few days. The military are of course fascinated by this, Jane's superior officer Colonel Ian Watts keeping her there for testing. A psychiatrist, Dr. Graham Knight, also attempts to assess Jane, though she rebuffs this. It becomes clear that the military has no intention of letting Jane go, and after she's transferred to Alaska for even more tests, Jane escapes instead in the company of a thief, Nick Pierce. Taking shelter with him and his two companions, Jane determines to reveal what happened and why to give her such extraordinary abilities.

This film was meant to start a series, but the one Sci Fi Channel produced ended up going with a different plot.