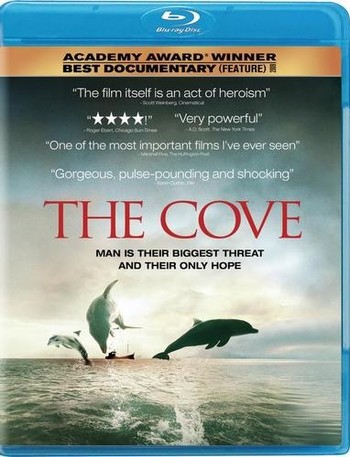 The Cove is a 2009 documentary directed by Louie Psihoyos, which won the 2010 Academy Award for Best Documentary.

It documents the practices of the small town of Taiji, Japan, a Real-Life Town with a Dark Secret. Every year, fishermen in Taiji drive thousands of dolphins into a small secretive cove, where they are slaughtered. The documentary revolves around a small crew of American and Canadian filmakers who try to find ways to plant cameras to document these horrible killings. It was followed up by a new series headed by Ric O'Barry, Blood Dolphins.