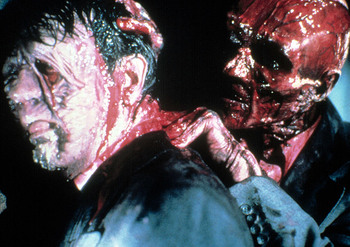 Frank Cotton shows that humans are often the worst of all.
"Time and again—it was always the same...My onslaught—beginning quickly, stopping suddenly—my sincere promises to return always kept. I fed on their terror—drank their torment and anguish in deep, slurping gulps—my never ending attacks maddened their imaginations—festered in their nightmares. It made me smile. It made me...happy."
—The Stalker, Clive Barker's Hellraiser, issue #14's "Later"
Advertisement:

Cenobites often operate on Blue-and-Orange Morality. The following characters, however, Cenobites or not, are pure evil.

In each group, entries are listed buy release date/publication date.