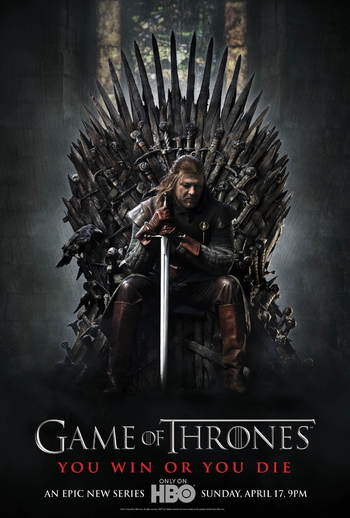 "Winter is coming."
"When you play the game of thrones, you win or you die. There is no middle ground."
— Cersei Lannister
Advertisement:

Set in a medieval fantasy world, on the continents of Westeros and Essos, the series tells a story of the various political and supernatural threats to the peace of the Seven Kingdoms of Westeros: a vast monarchy that is still recovering from a recent civil war which overthrew the ruling Targaryen dynasty. When the right-hand to the king dies under suspicious circumstances, House Stark - a noble house that rules the frigid and sparsely-populated Kingdom of the North - is drawn to the capital city of King's Landing, where a web of rival nobles scheme and maneuver to seize and retain power over the realm.

As the nobles of the Seven Kingdoms busy themselves with political games, far to the north, beyond a Wall sparsely guarded by an ignored and underfunded order of pariahs-turned-soldiers, a supernatural threat is building that - left unchecked - threatens to burst forth and destroy all life upon the Seven Kingdoms entirely.

Meanwhile, in exile across the ocean, the last remaining Targaryen scion slowly rebuilds her military and political strength from nothing, with an ultimate goal of reclaiming her homeland through fire and blood.

The series was adapted for television by screenwriters David Benioff and D.B. Weiss, who jokingly described it as "The Sopranos meets Middle-earth". Each season's arc was meant to line up with its corresponding book. However, this ultimately only worked for the first two seasons, as A Storm of Swords (which in pagecount equals the entirety of the Lord of the Rings trilogy) was eventually split into two seasons, with A Feast for Crows and A Dance with Dragons bleeding into both Seasons 4 and 5. Martin himself wrote an episode in each of the show's first four seasons. Starting with the sixth season, the show overtook the books, as Martin has yet to publish the sixth novel, The Winds of Winter. Benioff & Weiss were informed by Martin of the basic plotline of how the saga ends when writing the remaining seasons.

In May 2017, two months before Season 7 aired, HBO announced that they were considering five different pitches for Game of Thrones prequels: Bloodmoon (about the Long Night), House of the Dragon (about the history of House Targaryen), Flea Bottom (about the poorest sector of King's Landing), 10,000 Ships (about Princess Nymeria's migration to Dorne), and 9 Voyages (about the travels of Corlys Velaryon). A pilot for Bloodmoon was shot, but HBO opted not to greenlight it to series, while Flea Bottom never even reached the pilot stage before it was dropped. House of the Dragon, however, did get picked up, and is set to begin airing in August 2022. The fates of 10,000 Ships and 9 Voyages are currently uncertain.

Other than those five, HBO is also developing at least five additional spin-offs, including an adaptation of Tales of Dunk and Egg, a Jon Snow-centric sequel series (which was pitched by Kit Harington and will star him should it get picked up), and three adult animated series for HBO Max, one of which will focus on the Golden Empire of Yi Ti.