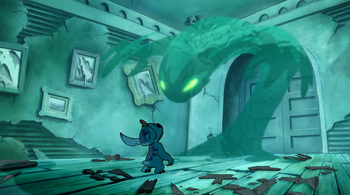 Stitch and his greatest fear meet face-to-face.
"Spooky" is the fifth episodenote second in production order of Lilo & Stitch: The Series. It first aired on October 12, 2003, which is also the same day that "Holio" first aired.
Advertisement:

It's Halloween on Kaua'i, and Lilo has dressed as a dead hula girl with a fake rubber axe on her head for Halloween, scaring the kids at the halau's Halloween party. "Kumu" Moses suggests to her that she should dress up as something more pleasant, like a princess, so Lilo goes home to change costumes.

Jumba and Pleakley are dressed up for Halloween, much to the former's chagrin. Lilo requests Pleakley to make her a princess costume right away, which he does so (he's very quick with the sewing machine). Stitch asks Lilo about Halloween, and she explains about how people scare each other on this day. He says he's not afraid of anything, and Lilo says she's not afraid either, except for clowns, broccoli, and a scary abandoned house on a nearby hill. However, she also shows him that she has a coping mechanism for whenever she's scared; singing the chorus of "Aloha ʻOe". Once Pleakley finishes the princess costume, Lilo changes into it and puts her rubber axe back on, then she and Stitch head over to the party.

At the party, Lilo seems to have returned as a dead hula girl again... but with her head in her arms and glowing green eyes, scaring the lives out of Mertle, Elena, Teresa, and Yuki. "Lilo" then changes into a giant spider, scaring Moses and the partygoers out of the halau.

The actual Lilo and Stitch then show up at the halau, seeing the mess in the hall. She finds Mertle and her posse hiding under a table, the four girls frightened by the sight of Lilo. They explain what they last saw of her as Stitch goes into the halau's kitchen to raid the fridge, only for him to find a green blob-like creature with glowing green eyes transforming into a torrent of water. The creature almost drowns Stitch until Lilo approaches the kitchen, prompting the creature to hide. A terrified Stitch shouts, "Hissing green eyes!" similar to what Elena said to Lilo about what she and the rest Mertle's posse saw. Lilo decides to go back home to see Jumba, although Stitch has quickly become paranoid of nearly everything from his scary experience.

While Stitch boards up every window on the house, with Jumba and Pleakley having changed into different costumes, Lilo finds out that Stitch dealt with Experiment 300, an experiment designed to change into anyone's worst fears. Jumba's especially worried about 300, since the experiment can do an uncanny impression of his ex-wife. Once Lilo gets Stitch to stop blocking off every opening in the house, the duo go out into Kokaua Town to hunt down the experiment.

They don't find the experiment anywhere in town; instead, Stitch ends up blasting every trick-or-treater in purple restraining goo. However, they come back home to find Nani trying to convince who is believed to be Cobra Bubbles not to take Lilo away. Lilo and Stitch expose "Cobra" to be 300, who Lilo decides to call "Spooky". The experiment escapes, leading Lilo, Stitch, Jumba, and now-dressed-as-a-matador Pleakley to the nearby abandoned house.

Naturally, Lilo and Stitch are afraid to enter the house, so they carefully walk in while she sings "Aloha ʻOe". Once they are trapped inside, they chase Spooky into a room with a swimming pool, nearly going in. However, Spooky then changes into a Monster Clown, scaring our duo and causing Stitch to fall into the pool. Lilo climbs up a column, but Spooky causes her to jump onto a diving board. She bounces off the board and ends up grabbing onto a high ledge. As Spooky decides to deal with Jumba and Pleakley as they enter the house, Stitch barely manages to get above water, clutches on a floating plank, and notices that Lilo is close to losing her grip on the crumbling ledge.

Jumba and Pleakley end up separating shortly after going inside, and Spooky changes to resemble Pleakley's mother, scaring him. Stitch, worried for Lilo as she is about to fall, starts singing "Aloha ʻOe" to himself and tries to swim to the diving board, but he falls underwater. However, he continues to sing the song to himself as he walks along the bottom of the pool. Lilo falls as he gets out of the water, but he manages to catch her in time. Stitch then goes after Spooky, who changed into Jumba's ex-wife after having frightened Pleakley.

Our blue hero chases the green blob into the house's dining room. Spooky tries to frighten Stitch again, but Stitch shows fearlessness and boredom, pretending to fall asleep, then punching Spooky when the experiment's guard is down. Spooky tries to escape in the main hall of the house, but Stitch manages to restrain him and put him in a containment capsule.

Lilo then decides to have Spooky help her out by making her house—which normally doesn't get any trick-or-treaters—the coolest place to trick-or-treat at by having him scare visitors for fun as they and Stitch hand out treats. She also implies that once the holiday is over, Spooky will begin scaring people year-round at the abandoned house as his "one true place".

The experiment of the episode: