Comic Book / Empire of the Dead 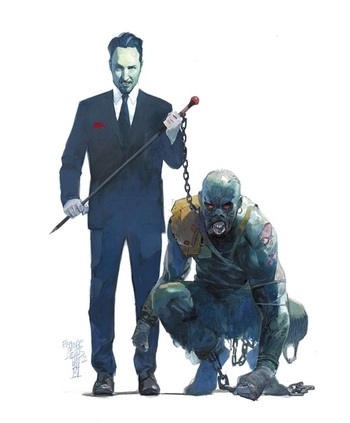 The night unleashed the horror of the undead. The dawn ended our world as they quickly encompassed it. The day arrived and saw our world in ruins After the End. Now we live in this hellish land. What's next? An empire.

Empire of the Dead is a trilogy of comic book miniseries created by George A. Romero, continuing the themes in his zombie trope codifying Living Dead Series. It's after the Zombie Apocalypse, as humanity lives in the ruins of society alongside the wandering corpses that drove it to devastation. Mankind keeps themselves busy regardless of their current predicament, often watching controversial gladiator games which use zombie fighters. Unknown to these survivors, New York City is not infested by one kind of living dead, but two. For in reality, their mayor, his family, and his inner circle are blood-drinking vampires.

For years, they maintain their secrecy with utmost discretion. Then the zombies came and they finally found a scapegoat. Their rule will soon hit trouble, however, as survivors sick of their aristocratic rule over NYC or know of their secret are planning a coup.

Currently, talks for a TV Series by AMC are underway.