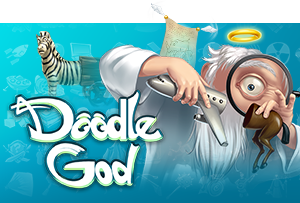 The power of creation is in your hands!
Advertisement:

In the beginning, there was nothing...

And that was quite boring, so DOODLE GOD created earth, air, fire and water. Then, Doodle God did say that thou shalt make a game documenting his exploits and that it shall be filled with Ham and Awesome...

And there was much rejoicing.

Doodle God is a game on Newgrounds, Kongregate and iOS produced by Badim

. The mechanic is simple enough, you start with four elements and, by combining them, you create new elements. You combine the new elements to make newer elements, and so on. Sounds simple? There are right around 250 elements in the game at the time of writing. Needless to say, it's not easy.

The 2010 Halloween season debuted a spinoff called Doodle Devil. The mechanic remains the same (although you start with two elements instead), but the premise is different in that you are creating sin and destruction. More than 100 elements are available for Doodle Devil as of this writing.

In May 2011, Doodle God 2, a flash game containing the first 3 episodes of the iOS version was released by Badim. Around the same time, Doodle Farm, in which the player creates animals, was released. The latter was rereleased in 2016.