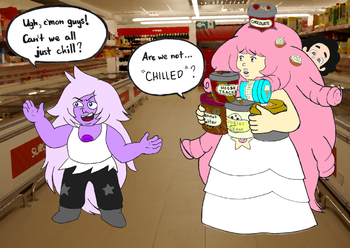 This story is definitely about Rose Quartz, sweet puns, and the Gems bonding over grocery shopping.

Selaginella lepidophylla. Siempre viva. Stone flower. —a type of spikemoss noted for its ability to survive almost complete desiccation, and then revive with the tiniest amount of water.
This is why, among its many names, it is called The Resurrection Plant.

Unfortunately, reality isn't quite that simple.

is an ongoing Steven Universe collaboration fanfic by DrJekyl

(also featuring a chapter by SwordTheGuy

It's on Archive of Our Own and can be read here

, and on Fanfiction.Net right here