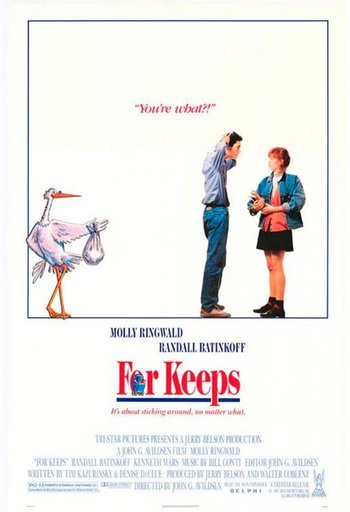 For Keeps is a 1988 Coming of Age comedy/Melodrama directed by John G. Avildsen.

Molly Ringwald and Randall Batinkoff star as Darcy and Stan, a couple in high school and in love. When a weekend together results in sex and Darcy becoming pregnant, they're forced to face the reality of their actions, and have to make tough decisions on how to handle their future. The film was hailed at the time for its realistic depiction of the difficulties of teen pregnancy (such as not shying away from the financial aspects, or of Darcy's postpartum depression), but it has since become an Old Shame for Ringwald, who feels that it glamorized teen pregnancy and in part because of one hell of a Troubled Production.

The film also included the film debut of Pauly Shore as Retro, a friend of Stan's.