Video Game / The Simpsons: Tapped Out 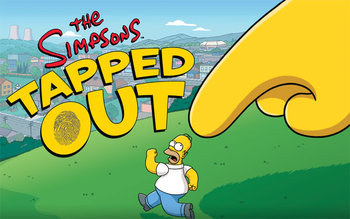 The Simpsons: Tapped Out is a village simulator based on The Simpsons that was first developed for iOS on February 17, 2012. It was then later ported to Android on January 29, 2013. The game was developed and published by Electronic Arts.

The premise of this game is that the player must help Homer Simpson rebuild Springfield after a meltdown at the Nuclear Power Plant causes the entire city to be destroyed, stripping it bare of all buildings and citizens (excluding Homer and a huge heap of radioactive waste). As you progress through the game and avenge iconic Springfield locations, such as the Simpsons' family home and the Kwik-E-Mart, you also unlock more of the townsfolk, e.g. Ned Flanders with the Flanders' home and Principal Skinner with Springfield Elementary.

The game incorporates the use of experience points, with which the player can level up and gain access to more characters, decorations and buildings, and in-game currency that enables the player to purchase said items. Also included is premium currency, in the form of donuts, that the player can purchase with real money in order to gain access to exclusive (and sometimes limited-time only) items that enhance gameplay.

The game requires an internet connection to play, as there are regular updates available for the app that are either automatic, or require manual installation.

The game has spiritual siblings for other Fox animated comedies in Family Guy: The Quest for Stuff and Futurama: Worlds of Tomorrow.