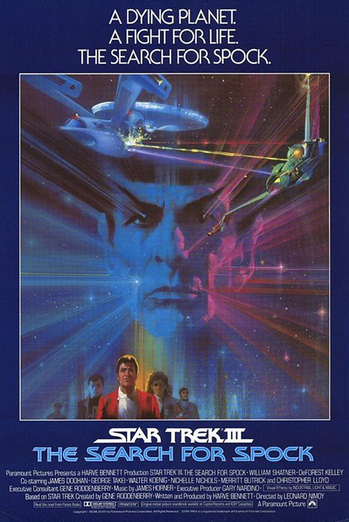 Don't worry. They find him.
Sulu: The word, sir?
Kirk: The word is no. I am therefore going anyway.

The one where the Cool Starship Enterprise is destroyed.

Star Trek III: The Search for Spock is the third movie in the Star Trek film series, released in 1984.

Incoming Late-Arrival Spoiler: in Star Trek II: The Wrath of Khan, Spock was killed, meant to be Killed Off for Real. But Nimoy changed his mind and decided he didn't want to leave the series, as working on that film was such a great experience. Thus room was left at the very end of that film for him to come back, and this film was all about this. Spock himself sat in the director's chair this time and did so again for the next film.

You see, Spock put his katra into McCoy before he died, so now the good doctor is Sharing a Body with the late Science Officer. Now, if only Spock's body could be raised as well. No, wait, his body landed on the Genesis Planet, so now it's a living empty shell! The Rapid Aging down there means he has to repeatedly go through Vulcan PMS and Mate or Die. Fortunately, Saavik happens to be there. Now, the obvious thing would be to reunite Spock's body and soul, but the Obstructive Bureaucrats say no. The crew sets off for Genesis anyway, of course, where the Klingons are waiting, headed by Commander Kruge.

Of the six "original cast" films, this one is the closest in style to the original television series—for better or for worse. It's a modestly budgeted Continuity Pon-Farr story about people standing around on very obvious soundstages, featuring TV-quality frame composition, wonky science about "protomatter" bringing dead bodies back to life, and a climactic, badly staged grappling match between Kirk and a cunning villain of the week. It is literally a big-screen version of a TOS episode, and at times it does look and feel fairly cheap because of it. However, it is ultimately salvaged by a cast of twenty-year veterans who take advantage of the limited scope to truly shine, some amazing effects work and action sequences courtesy of Industrial Light & Magic punctuating the flat direction.

Overall, it's best classified as So Okay, It's Average, and it's about the only Star Trek film that elicits neither strong love nor strong hate from people. Unless they're Kirk/Spock slashers, in which case the film is not only universally adored but solid proof that the subtext is actually just plain text.

Star Trek III is the second part in a loose trilogy arc that began with The Wrath of Khan and concludes with Star Trek IV: The Voyage Home.

Tropes seen in The Search for Spock include: