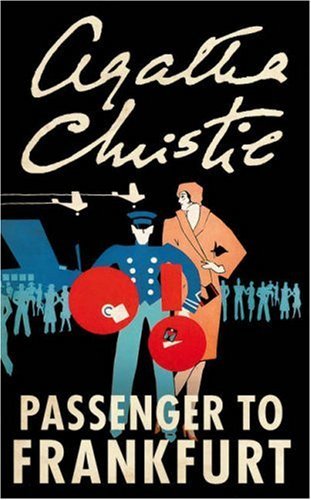 Passenger to Frankfurt is a 1970 novel by Agatha Christie.

It's not a murder mystery like most of Christie's works, but rather a spy thriller—in fact, the last of the spy thrillers that she'd written from time to time since the 1920s. Sir Stafford Nye is a rather undistinguished mid-level diplomat. While waiting in the Frankfurt airport he meets a mysterious young woman who asks him for his passport. She will board his plane while pretending to be him. She begs him for help because, if he doesn't help her escape, she will be killed. Sir Stafford, intrigued, agrees to help, and lets her take his passport, which he reports as stolen.

Nye eventually gets back home where he's quizzed by his acquaintances at the Foreign Office. It turns out that the woman who took his passport is a spy code named "Mary Ann". Nye, intrigued, puts out a subtly coded message for her in the newspaper. The woman makes contact with him and invites him to an opera. The woman, whose real name is Countess Renata Zerkowski, eventually enlists Nye's help in exposing a secret conspiracy. The conspiracy, aimed at nothing less than taking over the world, seeks to manipulate left-wing student protest movements into the establishment of a Nazi Fourth Reich.