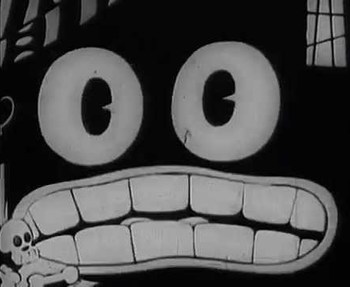 Skulls and Sculls is a 1930 Felix the Cat cartoon, directed by Otto Messmer, produced by Pat Sullivan and distributed by Copley Pictures Corporation.

The film starts in a dark, nightmarish setting with skeletons and a creepy face coming up towards the screen. Felix is sneaking past a crowd of clothed ghosts but gets a blindfold wrapped around him, scaring him. A goat comes along and headbutts him onto his back, taking him for a ride and then tossing him off down the stairs. Felix skips down them, but then the stairs turn out to be the back spines of a dragon. Felix finds a window with bars, playing it like an instrument—only for the bars to be revealed to be flamingo legs. Felix escapes and skips across a pond happily—only for a ghost to pop up and chase him. Felix wraps him in a ball and skips away merrily. He starts skipping across a tree over a pond, but the hooded figure appears again, flinging the tree like a catapult and sending Felix flying away, bouncing off some telephone poles into a house, where a crowd of more hooded figures awaits him. By the time Felix becomes aware of his surroundings, he's dragged off and is placed in a dark room, about to be sliced in half by a pendulum—only for the lights to come on and reveal that it's not a pendulum, but a ceiling light.

Felix realizes that it was all part of a fraternal initiation—and many of his animal buddies are surrounding him, and have a laugh at what's revealed to be an elaborate trick. Felix, relieved, laughs off the whole thing as two of his college buddies carry him off to a boat race. The race starts with a monkey popping a balloon with a mosquito, and the boaters are off. Felix shares a boat with three frat brothers, each carrying an oar, with Felix calling them on to push forward. The boaters end up going up a waterful, albeit with some difficulty. Four giraffes stay ahead of them, ducking under a bridge, as an elephant, riding a basket for a boat, uses his trunk to spray himself forward instead of his oars. While all of this is going on, the crowd is cheering on the race. Suddenly, Felix's buddies pass out from fatigue. Refusing to lose the race, he gets angry and thinks of a plan—he sends his tail down into the water below, which a fish mistakes for a worm—the fish grabs the tail, which reattaches to Felix, and pulls him ahead so fast, that Felix speeds way ahead of the competition. Felix crosses the finish line, a pair of elephant trunks, as the crowd goes wild. Felix's two frat buddies from earlier carry him off in victory as the film irises out.

The cartoon is in the Public Domain and can be seen here.