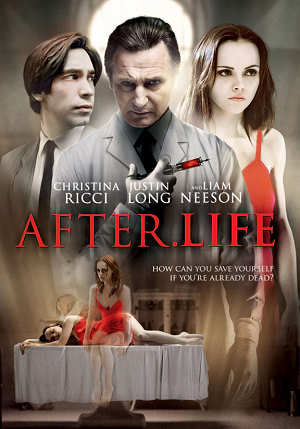 Ricci stars as Anna Taylor, a young school teacher whose relationship with her boyfriend Paul Coleman (Long) has grown strained. After fighting with him at dinner over a misunderstanding, she drives off and gets in a car accident. She wakes up in the funeral home of Elliot Deacon (Neeson) who says that she's dead. Apparently he has the gift (or curse, as he later complains) of being able to see and speak with the dead. However, she begins to suspect he may be lying, as does her boyfriend Paul, but time is running out as the funeral is in two days, with Deacon intent on completing his work...

No relation to the ITV show, the 1996 game, or the 1998 Japanese film Wonderful Life (released in the west as After Life).

As you might have surmised from all the tagged examples below, huge spoilers ahead!