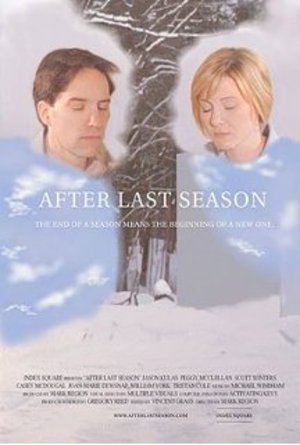 If you think this poster looks cheaply made, just wait until you see the movie itself.
Advertisement:

After Last Season is an independent movie from Index Square Productions, released in 2009 and shown in only four theatres upon its release. According to the official synopsis, it is about two medical students who use experimental neural chips to figure out the identity of a killer that has been murdering their classmates. Said chips allow characters to project their thoughts. The plot also involves supernatural forces, long philosophical conversations and a Mind Screw ending.

The film is notorious for its No Budget facsimile seen through settings, acting performances, computer-generated sequences, and music that many say would fit that description. The resulting factors have led most reviewers to wonder whether or not the movie was a serious effort or a parody; Word Of God insists it's the former

The film gained notoriety after the trailer

was originally released online. The notoriety only grew once the final product premiered. After Last Season garnered further exposure after it was briefly featured on The Spoony Experiment. The film's distributors asked The Spoony One to take his videos down, and Spoony's treatment of the film is now available