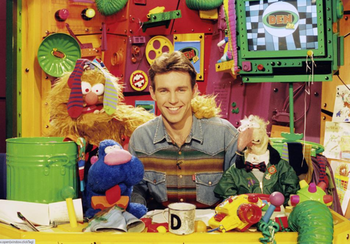 The usual gang: Socky the Sock Monster, Zuppy, Ray and Dustin.
The Den was an Irish children's programming block that aired on RTÉ2 from its inception as Dempsey’s Den in 1986 until its cancellation in 2010. For 80s, 90s and 00s Irish kids The Den was the answer to the British CBBC and CITV bringing with it a uniquely Irish sensibility in the form of puppets and subversive humour.
Advertisement:

Starting eponymously as Dempsey's Den in 1986 as a two-hour afterschool block the first incarnation of the block consisted mostly of animated cartoon series whose broadcast rights were bought by RTÉ with linking segments and interstitials presented by popular radio presenter and DJ Ray Darcy. The most popular segment from this era that would be carried throughout all incarnations of the block would be the Birthday Roller, wherein the names and ages of children would scroll up the screen on the day of their birthday based on the details submitted by their parents and be read out by one of the presents. In later years a photograph or picture could be sent in and the presenters (humans and puppets) would wish them a personalized “Happy Birthday” through the camera in anticipation that they were watching.

While RTE One was often regarded as the broadcaster's main channel and would air current affairs shows, news, documentaries, soaps and classic films during weekdays RTE Two was designed to be largely youth and entertainment-orientated. This meant as The Den mostly aired in two blocks on weekdays, the mornings from around 7am to 9am and afternoons from after 3pm to 5.30pm the space in between was often given to pre-school programmes and animated series without a presenter. Effectively, The Den took up half the day on RTE Two.

Throughout its run The Den had many presenters accompanied by a cast of memorable puppets. Upon its launch in 1986 The Den was hosted by Ian Dempsey under the title Dempsey's Den with the alien twins Zig and Zag and their dog Zuppy. Zig and Zag proved to be immensely popular with audiences and were offered their own show in Britain by Channel 4 to which a replacement had to be created to fill the void left by their new contract: and from there came Dustin the Turkey, who has been called "most subversive comedy force on Irish television". Dustin came to be the breakout character amongst an incredibly colourful cast of characters whose perchance for mocking celebrities (often to their faces) and commenting on newsworthy stories that young viewers would understand in the character of a unrestrained Dubliner (colloquially referred to in Ireland as 'a Dub').

Sadly cut backs and management changeovers at RTE would lead to less emphasis on presenters and puppets that made The Den iconic. With the decision to rebrand RTE's children's and young people's output as TRTE and RT Ejr The Den came to an end in September 2010 after three decades on Irish television.

After a reunion segment on RTÉ's Comic Relief in 2020, it was announced that The Den would be coming back in November 2020, reuniting Zig, Zag, Ray and Dustin to host. The Den returned that year to Irish TV in a new format, mixing celebrity guests, competitions and music. Despite widespread public goodwill, the series was not renewed, prompting Ray D'Arcy to speak out publicly about his disappointment. A petition against the cancellation has received over 1000 signatures.

Series that have aired on The Den

Tropes associated with The Den include: