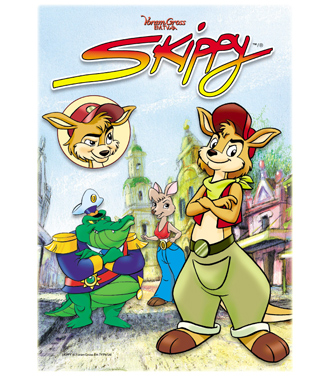 Skippy: Adventures in Bushtown is an Australian animated series created by Yoram Gross of Blinky Bill fame. Set in and around a fictionalised Australian town, the series differs from the original live-action Skippy series, as it is animated and is set in a World of Funny Animals. For example, Skippy is a kangaroo who wears a baseball cap (and is also male this time).

Skippy the Bush Kangaroo, voiced by Jamie Oxenbould, is a young park ranger who resides in Bushtown. He always happens to get in the way of Mayor Croco, his greedy wife Suka, his pack of goons, and his frequent get-rich schemes which often endanger the town.