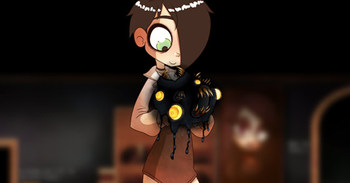 Miskatonic: Where Cute Witches Collect Screaming Masses.
"I am here today to tell you a story. A story about a girl who ruined everything"
—Narrator Madame Peanutbutter

The Miskatonic is an English-language Horror Comedy written and illustrated by Jack Cayless through Rapscallion Games. Not related to the Miskatonic University of Demonbane.

Charlotte LeStrange is a witch from Maine who lives in a world where all H. P. Lovecraft’s monsters are not only real but accepted as a fact of life. She’s recently been hired as a security guard for Miskatonic University. Acquainting herself with the faculty, she comes across a conspiracy that’s nefarious even by the standards of her society. With a ragtag crew that includes a cannibal and a few Eldritch abominations, LeStrange is determined to get to the bottom of it. Even though we know she’ll end up ruining everything.

The Miskatonic provides examples of: