Note: Characters are organized by their rank at the time of the end of the series. 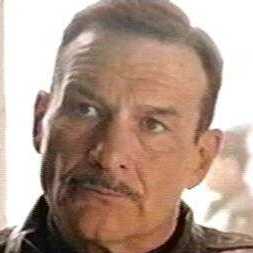 The man who commanded the 506th Parachute Infantry Regiment throughout the war.

He is the highest-ranking officer among the cast credited in the opening. 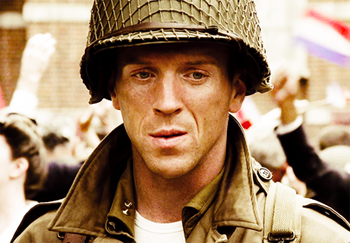 The central character of the series, with the biggest number of POV episodes (#2, 5, 10 and, arguably, 1). Starts the series as a 2nd Lieutenant and is eventually promoted to Major thanks to his competence, tactical genius and general badassery.

He is portrayed as a model leader (is calm and unflappable, cares about his men, can hold his own in combat, an excellent tactician) and an all-around good person (even if he's considered overly straight-laced by some). 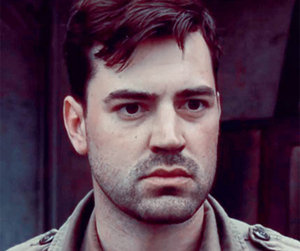 Nixon is a 2nd battalion intelligence officer (eventually moved to a regimental position), known for his sardonic wit and his apparently endless supply of Vat 69 whisky. He comes from a very privileged background (complete with prep schools and a sophisticated international upbringing), unlike the majority of Easy Company men who had to endure the hardships of The Great Depression.

Throughout the series he develops a drinking problem (which gets him demoted from Intelligence to Operations) and a disenchantment with how things are run in the army. He is Winters' best friend and frequent confidant. 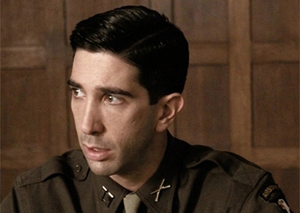 The training officer at Camp Toccoa. He's petty and short-tempered, finding fault with the smallest (occasionally imagined) infractions, which earns him the hate of Easy Company men. He's obsessed with Easy being the best company in the Division and drills his men to near-perfection by methods that are somewhat sadistic. As it often happens, he himself is not particularly competent and as a result is relegated to being a supply officer. 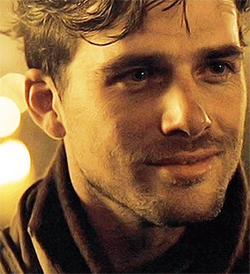 Initially one of Dog Company's platoon leaders, he takes command of Easy during the Battle of the Bulge and stays with them for the remainder of the war.

Fearless, professional and nonchalant, Speirs is perhaps the most absurdly badass member of Easy and one of the few to stay in the army once the war's over. He is the subject of many rumors regarding his treatment of German prisoners of war and the fact that he shot one of his own men for disobedience.

The regimental chaplain, who administers last rites to dying soldiers even when under fire. 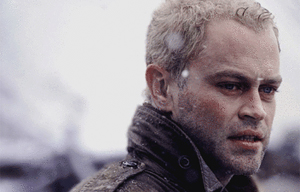 Buck was a star athlete at UCLA and played catcher for the college baseball team. Considered to be one of the best officers of Easy, despite being overly friendly with his men and treating them as fraternity brothers rather than subordinates.

Serves as company leader during the Battle of the Bulge, which is highly unfortunate since he's incompetent, cowardly, and takes to hiding in his foxhole instead of trying to run things. He is eventually relieved of his duty by Winters, much to the joy of Easy men.

A young officer fresh out of West Point, he joins Easy late, at Haguenau, and the war-hardened veterans of Easy brush him off as naive and incompetent. However, he exceeds their expectations and proves his worth in combat.

Easy's CO after Sobel and before Winters, he's killed when the plane with Easy's CO and HQ sections is shot down. 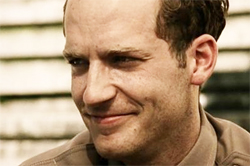 An invariably cheerful Easy Company CO and a friend to Nixon and Winters. While in training he would often get demoted for picking fights but would inevitably get promoted again thanks to his leadership abilities.

A Running Gag involves him lugging his reserve parachute all through Normandy in hopes of turning it into a wedding dress for his bride, Kitty. The plan works 100%.

Easy company's CO after Winters is promoted. Served as commander in Holland and led Easy during its rescue of survivors of the British 1st Airborne Division. Replaced by Dike after being wounded by one of his own men. Appears in Episode 5, "Crossroads." 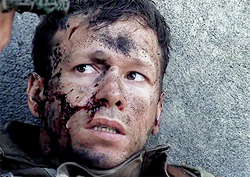 A quiet and unassuming NCO, Lipton is the focus of episode 7, "The Breaking Point", wherein he tries to keep Easy Company's morale up while Lt Dike hides in his foxhole and Lt Compton slowly falls apart.

Thanks to his leadership abilities and his good heart, the Battle of the Bulge goes smoother than it could have, and Lipton is given a commission in recognition of his bravery.

Appears in all 10 episodes.

An Easy officer, whose default reaction to anything is either to get confused or to panic. He's not a good commander, but definitely not for lack of earnestness and trying on his part.

An Easy officer who "thinks he has to yell all the time". Holds the distinction of being the only 2nd Lieutenant in the regiment who is also a platoon leader. 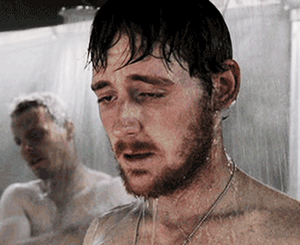 The everyman of the series, Malarkey is a college student who enlists after the attack on Pearl Harbor. Never seriously wounded, he ends up serving more time on the front lines than any other member of Easy Company.

One of the few characters to appear in all 10 episodes.

One of Easy's NCOs. He's promoted to sergeant in the very first episode and to Staff Sergeant later in the series. Portrayed as reasonable, reliable and a man of few words. 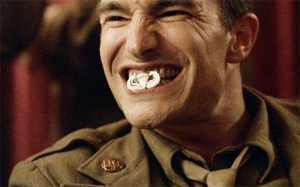 A young man of Italian descent, remarkable for his reckless abandon in battle (he's not called "Wild" for nothing), a tendency to go AWOL from hospitals and very blunt demeanor. Despite his apparent harshness, he is a true friend, as evidenced in episode 7 when he disregards artillery fire and tries to drag the injured Toye to relative safety, an attempt that proves futile when his leg is blown off. 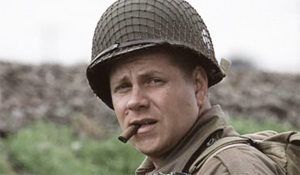 A calm, large soldier who is occasionally given flak for his farmboy sensibilities. He is described by Dick Winters as "one of the best" in the company.

Episode 4, "Replacements", is from his POV. 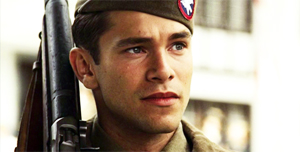 A mild-mannered, soft-spoken young man from rural Virginia and the best sharpshooter in the company.

One of the seven characters to appear in all 10 episodes (along with Winters, Nixon, Lipton, Talbert, Malarkey and Roe).

Easy NCOs who do not get much focus devoted to them. Strangely, Talbert is one of the few characters to appear in all 10 episodes. 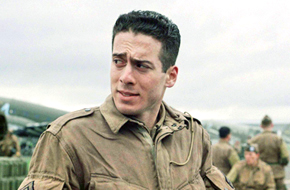 One of Easy's Staff Sergeants; a miner before the war.

He earned 4 Purple Hearts, the highest total for Easy. 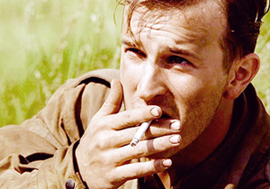 Member of the mortar squad along with Penkala and Malarkey, and the latter's best friend. His playful sense of humor can almost, but not quite, rival Luz's.

He's among the few Easy men to have gone to college.

One of the original Toccoa men. He enlisted with Shifty Powers and is extremely loyal to the company.

Easy NCOs who don't get much screentime devoted to them. All three survive the war.

An Easy NCO who gets wounded in Carentan 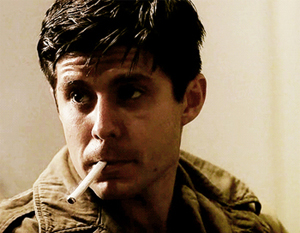 A Portuguese American from a family of 10 whose talents include a) being able to imitate just about anyone and b) causing trouble. Whenever wacky hijinx ensue, it's usually thanks to him.

Despite his lightheartedness, he is a highly competent paratrooper and one of the few Easy men to be with the company from Toccoa to Germany (he manages to get through war unscathed).

As the ending narration reveals, it is a testament to the sheer force of his personality that 1,600 people attended his funeral in 1998. 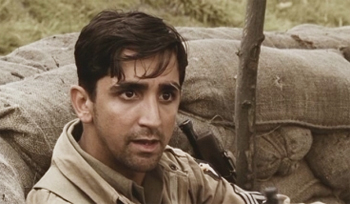 A young man of Italian background, most often seen in the company of Luz.

He survives the war and works as a postman afterwards. Until his death on October 24, 2013, he was the oldest surviving veteran of Easy Company. 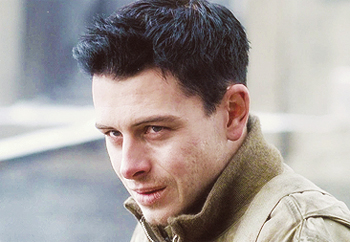 The company's medic, he steadfastly performs his highly stressful job in the direst circumstances, including under fire, and as a result starts to suffer from Combat Exhaustion as war goes on. While compassionate, he is reluctant to form any emotional attachment to other soldiers (since it's easier to have a random soldier, rather than a friend, die in your arms). However, he starts to connect with others during the Battle of the Bulge.

He is half-Cajun, and his knowledge of French helps him strike a friendship with a nurse in Bastogne.

Appears in all 10 episodes and is the POV character for episode 6. 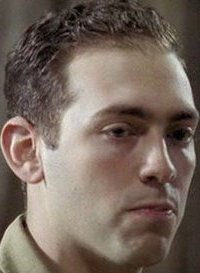 One of Easy's machine gunners. 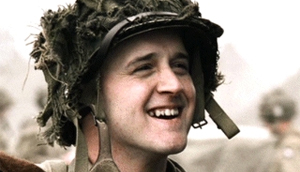 A cheerful young man who dreams of obtaining a Luger to bring home as a souvenir. His wish is fulfilled in the woods of Bastogne, but the Luger discharges and causes Hoobler's death.

The only Jew in the company other than Sobel, Liebgott is an angry young man whose participation in the war is motivated by his hatred for Nazis.

After the war, he returns to cab driving and cuts off all contact with other members of Easy.

He is a big fan of Dick Tracy novels. 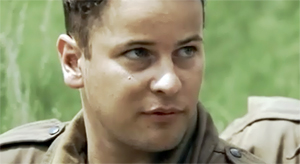 Part of the mortar squad along with Muck and Malarkey, and their best friend. 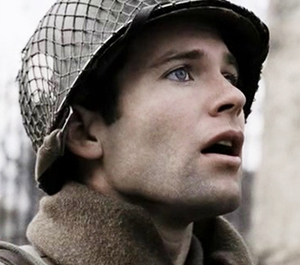 A Toccoa man who is one of the few to have gone to college. He misses the entirety of Battle of the Bulge while recuperating from a wound and is thus treated as New Meat upon his return to the company. His significant diplomatic skills help him win back the trust and respect of others. 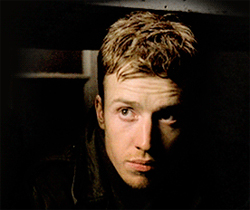 A friendly and amiable soldier who joins Easy Company after Normandy. Unlike most replacements, he fits in easily with the company and is lucky enough to make it through the war.

Easy Company's other medic - more personable and friendly than Doc Roe but growing increasingly dissatisfied with his role in combat.

A replacement that joins Easy in Germany. 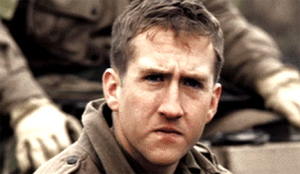 A soldier who has been in the army way longer than other Easy Men yet never got a promotion. This has made him somewhat unfriendly, especially to new recruits. He is portrayed as a complainer and a bit of a coward. 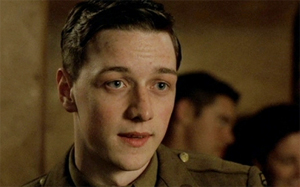 Introduced in episode 4 as one of the titular replacements.

A young man who suffers severe shell-shock during D-Day landings and has to try and overcome his fear of death and wounds. 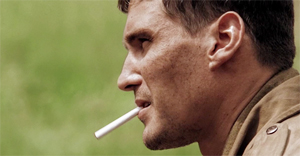 A private within Easy and one of Malarkey's good friends. Infamous for his looting tendencies, he brings to the States an unusual war spoil - two albums full of Hitler's personal photos.

An Able Company soldier who gets lost during D-Day landings and joins Winters & other Easy men in Brecourt Manor Assault.

Two of the first replacements for Easy company after D-Day along with Heffron and Miller. Both of them survive the war.

A replacement for Easy Company who shows up near the end of the series. 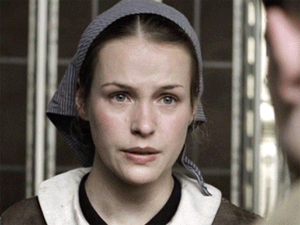 A Belgian girl who works as a nurse at the hospital in Bastogne and strikes a friendship with Doc Roe.

Her character is a tribute to all the civilians who helped the war effort.