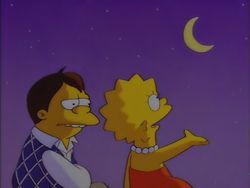 After stealing Superintendent Chalmers' car emblem off his new Honda Accord, Nelson is sentenced to janitorial work. While Lisa is serving detention for snickering at Nelson spraying Groundskeeper Willie with a hose, she becomes fascinated with and develops a crush on the bully. Meanwhile, Homer takes an autodialer that was recently used in a telemarketing scam and creates a telemarketing scam of his own.