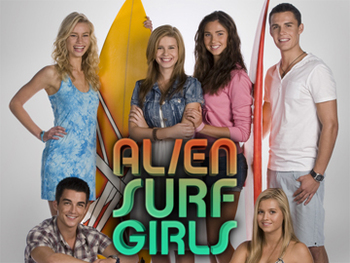 Lightning Point, also known as Alien Surf Girls, is a television show on TeenNick and Network Ten. It was created by Jonathan M. Shiff of H₂O: Just Add Water fame.

When Zoey and Kiki, two irrepressible girls from another galaxy, become castaways in the quiet Australian seaside town of Lightning Point, they recruit local girl Amber to keep them undercover. But the whole town is abuzz with the sighting of alien spacecraft, and the girls soon realize that they may not be the first intergalactic visitors to Earth.