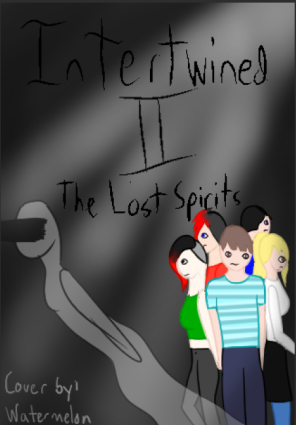 There was no space to put "Written By", unfortunately.note From left to right: Mara, Asher, Michael, Matthew, Evelyn, but what could that thing on the far left be...?
"No matter what, life goes on. Things keep getting tangled together, whether you want them to or not. You cannot change the past, and you can't see what the future holds. That's the lesson five friends are about to learn when something from their past comes back, and new problems start to pop up."
—Synopsis
Advertisement:

Intertwined II: The Lost Spirits is the sequel to Intertwined written once again by IAmHoussem17 and Watermelon Caticorn. It follows the group a year after the events of the first book. Things from the past start popping up and new problems show up.

On August 18, 2021, the second "Thank you" chapter was posted, along with the announcement of Houssem potentially discontinuing the book on his account, with co-writer Watermelon Caticorn

taking over, but this is no longer the case.

On May 24th, 2022, the sequel was officially discontinued.

For the discontinued book based off this series, see Intertwined: The Series.