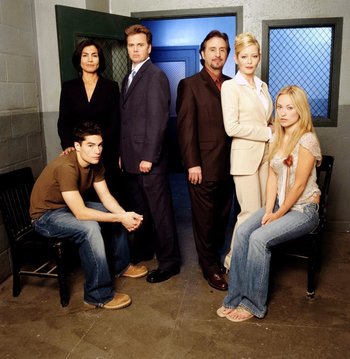 Skin was a short-lived 2003 modern update of Romeo and Juliet. Adam Roam was the son of a judge and the Los Angeles district attorney, running for re-election during a time when missing children and child pornography dominated the airwaves. Jewel Goldman was the daughter of a pornography magnate. They attempt to explore their love while their fathers try to both break them up and bring each other down.

Only three episodes were shown on FOX before it was cancelled; however, the entire series was later shown on SOAPnet. Possibly best known for being the show Hype Overdosed during the 2003 World Series, especially Ron Silver's famous line as Larry Goldman explaining to his daughter exactly what her boyfriend's relationship was to a certain area politician.

Not to be confused with the film Skin or the novel Skin by Ted Dekker.