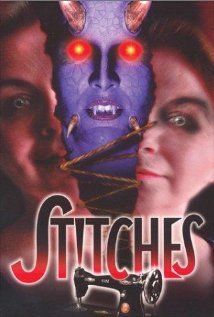 "Evil comes in many forms..."
Advertisement:

Stitches is a 2001 Direct to Video supernatural horror film directed by Neal Marshall Stevens and produced by Full Moon.

Mrs. Albright, an apparently sweet old woman, arrives at a bed and breakfast. However, Albright is not what she seems to be. She's actually a demon who manipulates people with their innermost desires until they make a bargain with her so she can steal their skin to make her skin suit, and starts working her magic on the other guests.

It was later mocked on a 2020 episode of Rifftrax.