All spoilers pertaining to the first timeline of the series (Soul Edge to Soulcalibur V) will be unmarked. You Have Been Warned! 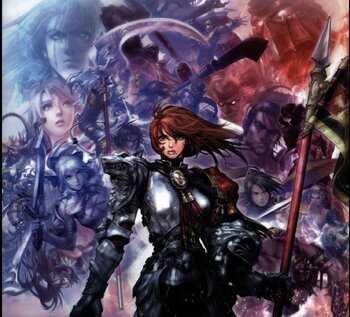 Welcome to the stage of history!
"Transcending history and the world, a tale of souls and swords, eternally retold..."
Advertisement:

The Soul series (unrelated to the "Souls Series"note Demon's Souls, Dark Souls, and Bloodborne and definitely not related to Soul Reaver) is a series of 3D weapon-based fighting games created by Bandai Namco Entertainment's team Project Soul, arriving shortly after the success of its other 3D fighter, Tekken.

In 16th-century Eurasia, rumors persist of a legendary sword of heroes known only as "Soul Edge". Only a few know that Soul Edge is actually an evil Artifact of Doom with an insatiable thirst for human souls. Some warriors seek Soul Edge without knowing the truth, whereas others seek to destroy it or capture its power for themselves.

To counter Soul Edge, an opposing sword of light was created: the spirit sword, Soul Calibur. When these two swords first clashed, Soul Edge was shattered into pieces and Soul Calibur fell dormant. Now, the shards of Soul Edge are seeking to reunite, oozing corruptive power that bestows misfortune on all who encounter them. An epic final battle between the two opposing swords is now fast approaching, with the fate of the world at stake.

The series began in the mid-'90s with Soul Edge, one of the first games to feature three-dimensional combat where every character held a weapon. Control was mostly similar to Tekken and Virtua Fighter, where characters could move along the three-dimensional plane and could be knocked out of the ring if they were careless. Characters could also deflect each other's weapon attacks, or break them and render them useless if hit enough times.

Soul Edge, though mildly successful in arcades (and on the PlayStation as Soul Blade), was largely overshadowed by Soulcalibur, which revamped many of the original game's aspects, including the three-dimensional movement, character combos, and timing, and completely removed the breakable weapon aspect. The Dreamcast port of the game rebalanced the gameplay and overhauled the graphics, becoming its system's Killer App in the process. It is often placed among game critics' "favorite games of all time".

Soulcalibur has since spawned five sequels, which have been ported to a number of home systems. Starting from II, the series would begin making use of Guest Fighter characters from other franchises, most notably Link, Darth Vader, Yoda, and Ezio Auditore, among others. A spin-off Action-Adventure title, Soulcalibur Legends, has been released for the Wii; IV has also been ported to the PSP as Soulcalibur: Broken Destiny, which guest stars Kratos, the God of War.note Despite Ares being a character in the series.

Soulcalibur: Lost Swords was released on February 6, 2014 in Japan and on April 22, 2014 in North America. Lost Swords was a single-player, online-only, free-to-play title distributed through the PlayStation Network and based on Soulcalibur V, the goal of which was for the player to collect loot through battles. Players could imbue the weapons with elemental properties, such as fire and wind. Virtual item sales were also offered. Lost Swords has since been shut down on November 30th, 2015.

Namco Bandai announced the next installment of the series, Soulcalibur VI, which is at least in part set during the events of the original Soulcalibur. It was released on October 19, 2018 for the PlayStation 4, Xbox One and PC.

As of Soulcalibur III, the series title seems to be Soulcalibur in a reference to Excalibur. The series underwent change in direction after this point. Soulcalibur V was directed by Daishi Odashima, who said he wanted the game to be named Soul Edge 2, but was rejected. In December 2013, the series again changed project direction, and Masaki Hoshino took over as head of Project Soul, leading development of Lost Swords and Unbreakable Soul. At some point he also left the team, resulting in Tekken 7 producer Motohiro Okubo stepping in to lead development of VI.

The series contains the following games:

Transcending media and the internet, a tale of tropes and cliches, eternally clicked...

The alternate universe single player modes, Weapon Master and Chronicles of the Sword, have examples not found in the main games:

Birth of a Nightmare

Siegfried quickly succumbs to the influence of Soul Edge... and thus, Nightmare is unleashed upon the world.

Birth of a Nightmare

Siegfried quickly succumbs to the influence of Soul Edge... and thus, Nightmare is unleashed upon the world.