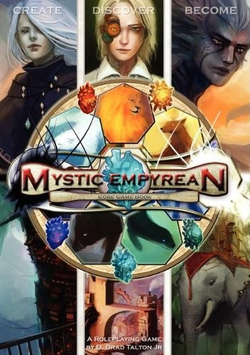 Mystic Empyrean is a tabletop RPG in which Personality Powers and shared game-mastering duty dominate gameplay.

The Grand Cornerstone shattered long ago, destroying a utopian world. Now, beings called Eidolons try to gather the Cornerstones that contain fragments of the old world and can be used to rebuild, and shape, a new one. Eidolons are typically mortals who Ascend to a Higher Plane of Existence and become able to reshape their own personalities and get powers based on them.