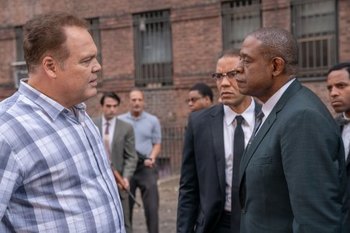 Godfather of Harlem is a 2019 Crime Drama that airs on ePix.

The fact-based series stars Forest Whitaker as Ellsworth "Bumpy" Johnson, a notorious gangster who returns home after spending 10 years in prison at Alcatraz to find his neighborhood in chaos due to the crack epidemic and incursions from the Genovese Crime Family, specifically Vincent "The Chin" Gigante (Vincent D'Onofrio). In an attempt to win his neighborhood back, Johnson finds himself making alliances up with figures such as Malcolm X (Nigel Thatch) and Congressman Adam Clayton Powell Jr. (Giancarlo Esposito) while also dealing with his own familial and community issues.

Tropes Associated with Godfather of Harlem Include: