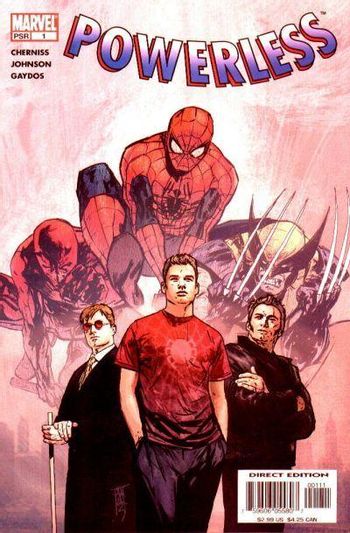 Marvel's Powerless is a 6-issue miniseries (August, 2004-January, 2005). It was co-written by Matt Cherniss and Peter Johnson. The art was done by Michael Gaydos. The setting, in a nutshell, is a re-imagining of the whole Marvel Universe, with a twist consisting of - well, the lack of any superpowers at all. This may be mistaken as both inverting and playing the Recycled In Space trope straight, but there's more than that. Let's just say it turns out to be a Genre Shift from your usual Super Hero comic to some kind of thriller.

People such as Matt Murdock, Peter Parker, Logan, Frank Castle, Bruce Banner and the like are all connected to their therapist, Doctor William Watts; after he awakens from a three-day coma spent dreaming of the main Marvel universe, Watts begins even hallucinating said people's Earth-616 analogues as soon as their name is mentioned.

In this universe, when Peter Parker isn't bullied by a Jerk Jock, he's threatened by Norman Osborn simply for working for Tony Stark instead. And instead of getting superpowers, the spider-bite only made his right arm almost useless.

In this universe, Logan... well... has the same problems as usual.

In this universe, Matt Murdock is a blind, yet brilliant, attorney, whose struggle against Wilson Fisk seems to be Unwinnable due to the latter having blackmailed a Mis-blamed Frank Castle into admitting a crime he didn't commit, in order to get away with it. A particularly traumatic experience is only the first price the man will pay for doing his job.

In this universe, Bruce Banner is simply held captive in an asylum due to... well, you know.

Essentially, this is what would happen if Christopher Nolan were to reimagine the Marvel Universe in the vein of The Dark Knight Trilogy.

See also Bullet Points for a series that similarly turns the Marvel Universe on its head, and as such, for example, in Italy got reprinted together with Powerless in a single book. The Noir books also tread a lot of the same ground but transfer the setting to the 1930s.

Unrelated to the TV series Powerless (2017), about a non-powered R&D department for Wayne Securities in The DC TV Universe.

Please be sure to add tropes with spoilers, all ye Tropers who browse.